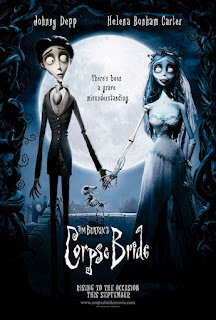 ANIMATION/FANTASY/MUSICAL/FAMILY with elements of comedy and romance

Maudeline and Finis Everglot (voices of Joanna Lumley and Albert Finney) have an old-money aristocratic name, but are penniless. All they have left is their name and social standing and a daughter named Victoria (voice of Emily Watson). The Everglots are willing to hold their noses and grudgingly marry Victoria off to Victor, whose money will allow them to climb back into the upper reaches of society (where their ancestor, the Duke of Everglot, was). By marrying Victor to Victoria, the Van Dorts will have the requisite class to go with their enormous wealth.

Upon their first meeting, Victor and Victoria do slowly and quietly begin to fall in love, but at the wedding rehearsal, Victor continually bungles his lines. Pastor Galswells (voice of Christopher Lee), who will preside over the wedding, sends Victor away until he can manage to learn the somewhat tricky lines of his vows. Humiliated, he wanders into the dark forest that surrounds his village. Alone, he successfully recites his vows, and even goes so far as to place his wedding ring on the root of a tree as a finishing touch.

However, the root is really bony finger. Like a magic incantation, Victor’s vows and the ring resurrect the decaying corpse to which the finger belongs. Up rises the strange and strangely beautiful Corpse Bride (voice of Helena Bonham Carter) wearing the tattered remains of a wedding dress. She may have died long ago (after being mysteriously murdered on her wedding night), but her search for true love and a husband never died. She grabs Victor, mistaking him for husband and drags him beneath the earth to the Land of the Dead, a colorful and rowdy place that is the exact opposite of the dull, somber, and cold Land of the Living (known by the denizens of the Land of the Dead as upstairs).

Victor tries in vain to return to Victoria. Meanwhile, the Everglots have hastily arranged a second wedding for their daughter, to a mysterious, arrogant, and somewhat sinister stranger calling himself, Lord Barkis Bittern (voice of Richard E. Grant). With his Corpse Bride determined to hold him in the bonds of their unholy matrimony, Victor must find is way back upstairs to his true bride-to-be before Victoria is also bond by an unfortunate marriage.

First, if I had the chance, I would tell co-directors Tim Burton and Mike Johnson and their animators and other crew that their 55-week shoot during, which 109,000,440 individually animated frames were set up and filmed, resulted in a truly glorious film fairy tale. I don’t know if they think the effort was worth it, but I sure as hell do. Corpse Bride is an exuberant stop-motion, pop Gothic animated fable. Delightfully and mysteriously creepy, the film is a sweet tale of love both lost and unrequited. Corpse Bride does have the usual Burton ticks. For instance, the Land of the Dead is a fun, colorful and oddly creepy place where the dead do more that just make the best of it, while the Land of the Living is so cold and somber. The living are so reserved, grave, serious and sober, while the dead party up!

However, it all works because the film’s internal logic makes sense (with only a few exceptions). The direction and camera work (they shot the film using digital still cameras rather than film cameras) create a sense of movement and a flow in the narrative that is… well, as animated as live action film. The script captures the film’s whimsical, yet eerie nature with a narrative that is melancholy, yet filled with funny moments and also dialogue that fits right in with all the whimsy, moodiness, and dead things.

The voice cast is excellent, and I’m loathed to single anyone out. However, Helena Bonham Carter as the Corpse Bride (whose name was/is Emily) does a superb job straddling the line between macabre and sweet and between comic and menace (especially in the scene when she arrives at the Everglot estate to get “her man” back from Victoria). Still, Johnny Depp (obviously Burton’s stand-in) and Emily Watson are also very good and make their characters charming and engaging. All in all, they’re part of fine cast and crew that made Tim Burton’s Corpse Bride a great film, a must-see for lovers of animated films.