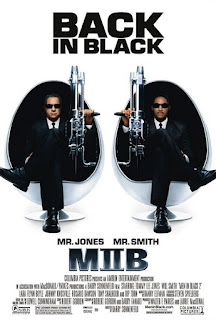 The subject of this movie review is Men in Black II, the 2002 science fiction comedy that is a sequel to the 1997 film, Men in Black. Both movies are based upon the comic book, Men in Black, created by Lowell Cunningham. As he was with the first film, Steven Spielberg is also the executive producer.

It was a long time in coming, and some thought it would be too expensive to make because of star salaries and production company profit participation, but Men in Black II finally arrived. Although not as fresh as the first film, MiBII is somewhat close to the original in that it is still imaginative and wacky, and Will Smith is still very funny.

When Serleena (Lara Flynn Boyle), a villain from MiB’s past threatens the planet, Agent J (Will Smith) has to convince former agent and his mentor Agent K (Tommy Lee Jones) to return to the agency. Complicating matters is the fact that Agent K is having a difficult time regaining his memory of his time as an MiB agent, and his memory is crucial to defeating Serleena. Meanwhile, Agent J has fallen for Laura Vasquez (Rosario Dawson), an attractive witness to a murder committed by Serleena.

One of the many things that I like about the original film was the cool opening scene, an homage to classic sci-fi B-movies. This film does something similar, but with a nod to those loopy, paranormal, conspiracy theory documentaries. The actors are all game, and with the help of some interesting cameos (including one by Michael Jackson) and some nice small roles, the film, for the most part, manages to keep us interested in what’s going to show up next on the screen. It’s a way of playing it safe, and keeping matters close to what audiences remember from the first film. Director Barry Sonnenfeld and his writers bring back all the atmospherics of the first, but add some sentimental and romantic elements. The romance actually works in a way of tying together the pasts of Agents J and K and also tightens the bond between the characters.

What this film does lack that the first one had is the intensity of the danger imposed by a rogue alien. While I found Serleena to be a viable threat as a villain, I thought that she lacked the kick of the Bug from the first film. The agents also spend a lot of time going from one location to another and each one just happens to be either the home of another alien or a secret storage bin for MiB paraphernalia and weaponry. I know that the filmmakers want to play up the idea that you never know what’s behind the façade, but each trip to another building just slows the film. The film never really kicks into high gear until its final fifteen minutes.

Still, it’s funny, and Will Smith carries the show, even through some dry moments. After the second time around, we can see that MiB is really the story of Agent J’s adventures in the organization and that Smith is very likely crucial to the success of any more Men in Black sequels. Although Men in Black II plays it rather safe, it is a pretty entertaining successor to an exceptional movie.