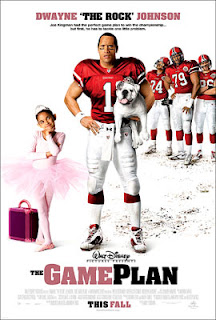 Dwayne Johnson’s movie career began with a small role in 2001 in The Mummy Returns, but before that he was a wildly popular professional wrestler known as “The Rock,” a name that has stuck with him throughout the first seven years of his movie career. Johnson claims that his Fall 2007 film, The Game Plan, is the last time he’ll be credited in a film as “Dwayne ‘The Rock’ Johnson.” Good for him because this tolerable kids movie turns out to be the perfect time to jettison his WWF moniker.

Boston Rebels quarterback Joe Kingman (Dwayne Johnson) is the toast of Boston, and boy, does he know it. Self-centered and egotistical, Joe has the respect of teammates, but he doesn’t really trust them. When the game is on the line, Joe calls his own number to make the big plays, but after nearly a decade, this superb physical specimen and all-around great player doesn’t have a professional football championship.

A confirmed bachelor, Joe lives in a lavish bachelor pad decorated with the latest personal electronic gadgets and numerous trophies for his personal (not team) achievements. Then, one day an 8-year-old girl named Peyton Kelly (Madison Pettis) shows up at Joe’s door claiming to be his daughter from a short-lived marriage. She expects to stay with him while her mother is out of the country, Peyton says. This isn’t what Joe needs just as he’s making what may look like his last best chance to win a professional football championship. Still, while Joe warms to Peyton, his ruthless, high-powered agent, Stella Peck (Kyra Sedgwick) doesn’t. And Peyton hasn’t been entirely truthful…

The Game Plan is an innocuous family film that will appeal to children who are too young to have seen this formula story countless times as many adult viewers have. Still, there is some appeal to these stories of wayward men who struggle with, then gallantly grasp the reigns of fatherhood. The truth is that the first hour and twenty minutes of The Game Plan is lousy. It isn’t until the last half hour that The Game Plan picks up real dramatic weight and suddenly the transformation of Joe Kingman from overgrown man-child to responsible dad becomes a stirring, gripping story.

As for the acting, everyone is bad, especially Madison Pettis as Peyton and Kyra Sedgwick as the meanie agent. Johnson, however, works at this movie with such gusto; he almost fools you into believing that this could be an Oscar-worthy flick. The Game Plan is strictly for diehards fans of “The Rock” (me – at least as an actor) and children.