"Scooby-Doo" the Movie is Kinda Doo-Doo 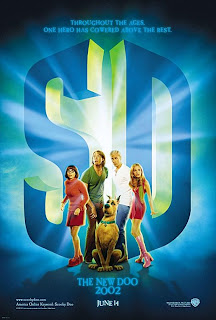 COMEDY/FAMILY/FANTASY/MYSTERY with elements of action

Why does there need to be a feature-length, live action, movie based on the long running “Scooby-Doo” animated series? There are a number of reasons. It’s an exploitable “intellectual” property owned by a giant corporation. It’s a recognizable property and brand name, and frankly, only in recent years has the property owner begun to maximize the licensing potential of this property. Also, most movies from the larger film studios are notoriously expensive; “new” ideas are risky, but remakes and adaptations of stories from other media are the way film studios go when they want to play it safe. To many people, however, both young and old (after all, the Scooby-Doo cartoon concept is over 30 years old), this isn’t a property; it’s Scooby-Doo, man, so a lot of moviegoers were eagerly awaiting the 2002 “live” action debut of Scooby-Doo. And I place live in quotation marks because our favorite cartoon dog is one of many things in this film that isn’t exactly live.

As Scooby-Doo begins, the gang of Mystery Inc. disband due to internal strife. Fred “Freddie” Jones (Freddie Prinze, Jr.) is full of himself and believes that he is the group. Daphne Blake (Sarah Michelle Gellar) is tired of her teammates viewing her as a weak link, and Velma Dinkley (Linda Cardellini) wants credit for her intellectual contributions to the group. As the unhappy trio departs, Norville “Shaggy” Rogers (Matthew Lillard) and Scooby (a CGI character) inherit the Mystery Machine, that van that has carried the kids across continents to solve mysteries, and retire to live their lives eating rude junk food.

The gang inadvertently reunites when the owner of Spooky Island, Emile Mondavarious (Rowan Atkinson) invites the former teammates separately by invitation to his island to solve the mystery behind the strange behavior of his resort island’s guests. What they find test their individual skills and forces them back together, but can they solve a mystery that might involve their past?

Scooby-Doo alternates between several phases. Sometimes, it’s really dumb, while other times it’s too lame to be dumb. It’s bad, ridiculous, and doesn’t make sense, which is odd because the creators behind the original cartoon series often went to great lengths to give plausible explanations for their often surreal, bizarre, and implausible stories. Yet, there were times when I really found some of the material to be funny. I can’t kid myself. This movie is for children, and not necessarily dumb children. It’s for children and for adults who love Scooby-Doo and are thrilled by the idea of a Scooby movie. Audiences can look forward to this kind of movie now thanks to the ability to render the strangest looking characters and give them complex movements with the aid of computer software. At one time, a Scooby-Doo movie would have meant an actor playing Scooby in an awful looking costume that wouldn’t fool anyone in believing he was Scooby. Now, computers can create an animated Scooby that looks more real and has more range of motion than the original character that was created using traditional cel animation.

Audiences are consumers, and consumers are suckers for the familiar brand names. While we might see Scooby as a beloved character, he’s a product. No studio is going to risk losing hundreds of millions of dollars in sales on a film through theatrical release, home video, television, and merchandising just to make a smart and witty movie. The Scooby cartoons were never smart and witty, anyway. Except for an occasional odd, short film from an inventive animator for the Cartoon Network during the 1990’s, the filmography of Scooby has been one of simpleminded entertainment for kids. And I have to admit that I watched lots of Scooby for over two decades.

Director Raja Gosnell, a former film editor, is a perfect choice to direct this. His knowledge of how film works allows him to create a functional film out of what amounts to a poor script. The story actually has something that’s vaguely neat and interesting – an idea here or there that might work. However, the writers seem mostly to be hacks that specialize in B movies. They’re used to doing atrocious work that is “not supposed to be taken seriously.” So I don’t know if the studio wanted this to stay dumb, or that this was dumb by either the writers’ choice or ability. Either way, they couldn’t seem to hold onto what inspiration they had, and I wonder if these guys even know how to aim it when they’re in front of a urinal.

The casting of this movie is mostly wrong. Matthew Lillard seems born to play Shaggy, and Linda Cardellini is tolerable as Velma; after a while, they all sort of grow on you like fungus, and you accept them. I have to admit that despite my reservations, I grew to like the computer generated Scooby. I thought of it as Scooby the same way I would a cel-animated Doo. I really didn’t like that the film introduced adult “personality” traits to the characters: lust, envy, insecurity, hate, revenge, anger, etc.

This film is mostly trash, something light and fluffy, a curiosity piece, in a manner of speaking, so see it for Scooby and Shaggy if for no other reason. There are some really sweet moments that I can’t reveal without spoiling the film, and the sets and costumes were really nice.