"Music of the Vampire" an Average Scooby-Doo Toon 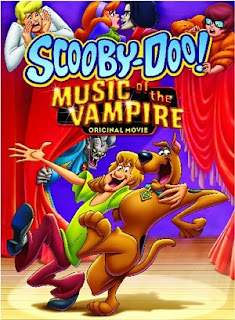 Beginning in 1998 with Scooby-Doo on Zombie Island, Warner Bros. has released direct-to-video animated movies based on the Scooby-Doo cartoon franchise. Except for a few years when two movies have been released, there has been at least one movie a year. Scooby-Doo! Music of the Vampire is the 17th movie in this direct-to-video series. It is also the second musical in the series, following Scooby-Doo and the Goblin King (2008).

They have been invited to the small town by Vincent Van Helsing (Jeff Bennett), a direct descendant of the famed vampire hunter, Abraham Van Helsing. Vincent has a museum and a parcel of land that he leases to a traveling vampire-themed festival owned by the unscrupulous Lita Rutland (Mindy Sterling). Part of this traveling show is Fangenschanz, a cheesy version of Cirque du Soleil with actors dressed as vampires. During a performance, the Fangenschanz troop apparently awakens a centuries-old vampire, Lord Valdronya (Jeff Bennett). Now, that he is awake, Valdronya wants a bride, and Daphne is the bride he wants.

For the past few years, I’ve been looking forward to each new Scooby-Doo direct-to-DVD movie. However, I didn’t have high hopes for Scooby-Doo! Music of the Vampire, especially after learning that it was a musical. The eight songs (two of which are reprised) aren’t bad, but they aren’t exceptionally good, either. I have seen some good Scooby-Doo movies; this isn’t one of the particularly good one, although it does have some nice moments. My niece, who was visiting recently, watched it numerous times during this just-passed Mother’s Day weekend. I don’t like Music of the Vampire as much as she apparently does, but she is currently in an I-love-everything-Scooby-Doo phase.