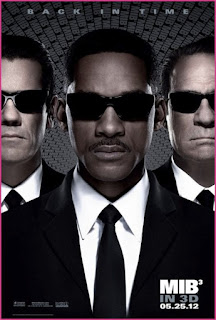 Men in Black 3 is a 2012 3D science fiction comedy. It is also the second sequel to the 1997 film, Men in Black. The Men in Black film series is based upon the comic book, The Men in Black, created by Lowell Cunningham. Steven Spielberg is one of the film’s executive producers, a title he held for the first two films. In this new film, the Men in Black agency (MiB) must use time travel to stop an alien from changing history.

Men in Black 3 kicks off with the alien criminal, Boris the Animal (Jemaine Clement), making a daring prison break. Boris has a past with MiB Agent K (Tommy Lee Jones), and he hatches a plot to both remove K and to make an alien invasion of Earth possible. K’s partner, Agent J (Will Smith), travels back in time to 1969, where he meets a young Agent K (Josh Brolin). Together, they race to stop Boris and to save themselves, MiB, and Earth.

The most accurate thing that I can say about Men in Black 3 is that it is pleasantly entertaining. Honestly, I really didn’t expect more than that. The story is sentimental, and seeks to make the connection between Agents J and K a more personal and deeper relationship than it was in the previous films. That’s nice, but the screenplay inadvertently creates loose ends that it ties up; thus, it essentially makes another film starring these characters unnecessary or at least forces a possible fourth film to approach J and K from a different point of view (hopefully, the latter).

There are a number of cameos (Will Arnett, Tim Burton, Lady Gaga, Justin Bieber, etc.) in this film that are nice, if you can catch them. Jemaine Clement is marvelous as Boris. Josh Brolin’s turn as the 29-year-old Agent K is both funny and poignant (and saves the time travel segment of this story). Conversely, Tommy Lee Jones looks like a tired, old man; never has the age difference between Will Smith and Jones been more pronounced than in this third MiB movie.