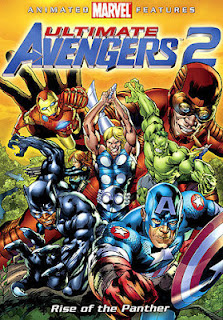 Ultimate Avengers 2 is a 2006 direct-to-DVD animated superhero film. Featuring Marvel Comics’ The Avengers, this film is a sequel to Ultimate Avengers, which was also released on DVD earlier the same year. The film is loosely based on The Ultimates, a comic book series writer Mark Millar (Kick-Ass, Wanted) and artist Bryan Hitch.

The alien invaders from Ultimate Avengers: The Movie, the Chitauri, are back, and this time they’re plaguing Wakanda, the mysterious jungle kingdom ruled by the Black Panther ( Jeffrey D. Samb). Unable to stop them, Black Panther reluctantly searches out the help of Captain America (Justin Gross), who is familiar with the Chitauri and their leader, Herr Kleiser (James K. Ward), who wears the guise of a Nazi officer.

After the enjoyment of the original DVD (direct-to-video) animated feature, Ultimate Avengers: The Movie, earlier this year, I was anxious to see the sequel, Ultimate Avengers II, and, for the most part, I wasn’t let down. The follow up takes a bit of time to get going because of all the backstory about the Black Panther, his land of Wakanda, and his customs, as well as backstory about Captain America’s battles with Herr Kleiser. There’s also more character drama – lovers’ quarrels, teammate squabbles, and intra-tribal disputes.