"Hell and Back Again" movie review 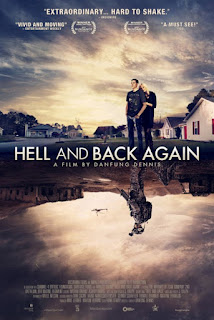 The subject of this movie review is Hell and Back Again, a 2011 documentary from director Danfung Dennis. The film was nominated for a best Documentary Oscar in 2012.

Hell and Back Again focuses on U.S. Marine Sgt. Nathan Harris who was wounded by Taliban machine-gun fire and returns to civilian life where he must deal with a badly-wounded leg and the stress of painful rehabilitation. Over time, post-traumatic stress disorder begins to take a toll on both Nathan and his wife, Ashley Harris. The film also switches back and forth between scenes depicting Sgt. Harris’ time in Afghanistan and his life back in America.

Hell and Back Again deserves credit for offering an intimate look at a serviceman’s life both at war and at home. However, I did not find the film overall to be all that compelling, although it does have some gripping moments. Early in the movie, director Danfung Dennis records the men in Sgt. Harris’ platoon, as they attend to a wounded comrade, Lance Corporal Charles G. “Sharpie” Sharp. Later, in that same scene, a caption appears over a black background informing the viewer that the medics could not save Sharp. Then, the video returns to show several men carrying and accompanying a body bag that apparently contains the body of Sharp. This is a stunning moment that made my breath catch.

The rest of the film lacks that potency, although there are a number of moving moments. At times, Nathan Harris comes across sympathetic, but other times, he seems pathetic, even crazy. I think the director made a mistake not featuring more scenes in which the wife, Ashley, talks to the camera – by herself without Nathan.

There is a scene towards the end of the film in which this does happen. Ashley is in a Walgreens Pharmacy when she opens up about Nathan’s behavior and the state of their relationship. This moment in the film tells us more about Nathan’s state of mind at the time than the entire rest of the film.

Hell and Back Again also has many good scenes in Afghanistan that give a sense of the difficulties the Marines have in-country, and how strained their relationships are with the locals in some areas. Viewers will see that the Marines are the ones who try to make the best of a bad situation, even in the face of obstinate and (understandably) frustrated locals.