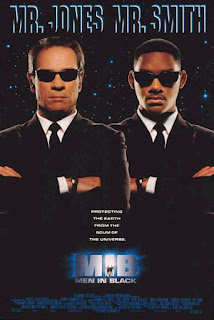 The subject of this movie review is Men in Black, the 1997 science fiction comedy film directed by Barry Sonnenfeld. Starring Will Smith and Tommy Lee Jones, it focuses on a secret organization that monitors and polices the alien population that secretly lives on Earth. Steven Spielberg is the executive producer of Men in Black, which is based on the comic book created by Lowell Cunningham) as his production company, Amblin Entertainment, is one of the studios that produced the film.

I don’t watch many movies twice; I watch even fewer thrice. Movies that earn multiple viewings really have to entertain me, and much to my surprise, Men in Black is one of those movies. It is certainly one of the few examples of science fiction and comedy blended to make a great film. From the opening strains of Danny Elfman’s score over the credits, I realized that I was in for something special, something that combined some of my favorite forms of entertainment: B movies, EC Comics, weird and pseudo science fiction, alien conspiracies, monsters, wry comedy and black humor.

In the world of this movie, a secret organization, the Men in Black (who identify themselves to civilians as INS agents) monitor and regulate the presence of alien visitors and other world immigrants on earth. When his partner “retires,” Agent K (Tommy Lee Jones) recruits a new partner, James Edwards (Will Smith), a brash young cop who showed excellent skill and much courage in the pursuit of an alien. After Edwards agrees to join, he must give up his identity; MiB literally erases everything that proved Edwards existed, and Edwards becomes Agent J.

Their first mission together is to find a dangerous alien “bug,” Edgar (Vincent D’ Onofrio) who seeks to possess a mysterious universe that is hidden somewhere in Manhattan, and, to keep him from getting it, a powerful race of aliens is ready to destroy the earth.

Director Barry Sonnenfeld was the perfect, though not the first, choice for this film. A former cinematographer (Raising Arizona, Misery), Sonnenfeld’s films always look gorgeous, and here he is abetted by MiB’s director of photography Don Peterman, who worked with Sonnenfeld on Addams Family Values and Get Shorty. Peterman captures the look and feel of low budget sci-fi film from the 1940’s and 50’s and the sparse look of such cult classics and The Brother from Another Planet and Buckaroo Banzai, while giving film a glossy, pretty look. Between director and photographer, they manage to make the film look like it belongs in the genres to which it aspires; this makes for a convincing and atmospheric film that feels right. At times, it is a sci-fi adventure, a detective story, a monster movie, and a horror film, but it never looks like an expensive, over produced Hollywood film, which it is.

The performances are excellent. Jones as Agent K is the consummate old veteran, and Linda Fiorentino as the morgue minder Dr. Laurel Weaver brings a wry and cynical sense of humor to the film. However, the actor who carries this film and sells it both as a wacky sci-fi film and as a funny movie is Will Smith.

Prejudiced science fiction and comic book fans often given short shrift to African American actors in genre films. The adventurous pasts and mysterious futures of sci-fi are often bereft of people of color, especially people of brown and darker hues. For years, racist fans blamed Richard Pryor for the poor quality of Superman III, when he was actually the film’s saving grace. In fact, when rumors placed Eddie Murphy in Star Trek IV, fans went into paroxysms of fear because black comedians can only ruin sci-fi films. “Look at Pryor in Superman III,” they cried through their white hoods. Of course, Star Trek films managed to suck eggs all on their own without a Negro jokester in sight.

Smith makes Men in Black. He’s our point of view. His reactions to his strange new environment sell the fantastical aspects of MiB as being actually both fantastic and weird. He’s the every man, albeit sexier and more personable than most, through which we follow the story. Despite the position of the actors’ names on the marquee, he’s the star and the lead. If you haven’t seen this wonderful and funny film, do so immediately.