"The Iron Lady" is Rusty and Crusty 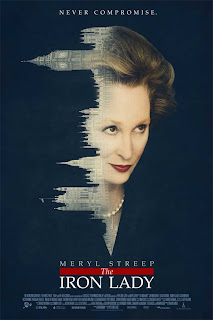 The film opens in late 2008 and finds former Prime Minister of the United Kingdom, Margaret Thatcher (Meryl Streep), struggling with dementia. Over the course of a few days, Thatcher looks back on the defining moments of her personal and professional life, while she also reminisces with her late husband, Denis Thatcher (Jim Broadbent). Meanwhile, her daughter, Carol (Olivia Colman), worries about her mother’s seeming inability to distinguish between the past and the present and also to let go of Denis’ possessions. Carol doesn’t know that her mother’s hallucinations involve conversations with her dead husband.

The Iron Lady won two Oscars, including a best actress win by Meryl Streep for her portrayal of Thatcher. Streep is good, but this movie is a disaster. It’s like some kind of Kabuki puppet theatre version of a British movie. Frankly, the movie is so stiff and weird, and for that reason alone, I think someone else should have won the best actress Oscar (Glenn Close for Albert Nobbs or Viola Davis for The Help). As for the best makeup Oscar: if making actors look like prune-faced goblins is Oscar-worthy, then, this film’s makeup guys, Mark Coulier and J. Roy Helland, should also get a genius grant.

I was not a fan of Thatcher growing up, but I remember her tremendous stature in the world, especially in Europe and in the United States. Thus, this movie is too small for such a monumental figure, although there are a few moments when Streep brings out Thatcher’s unbending will in way that aroused me and even made me hetero for a few moments (Hee hee).

However, The Iron Lady is ultimately a poor highlight reel about a powerful woman who broke down barriers. This isn’t really a movie about Margaret Thatcher; it’s a movie about an old lady with dementia. Even a non-fan of Thatcher, like myself, thinks she deserves better.