Happy B'day, Mel Blanc: The Night of the Living Duck 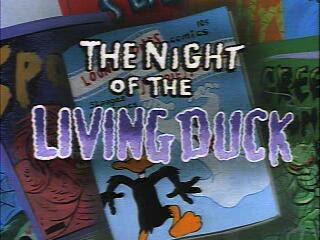 SHORT/ANIMATION/COMEDY/FAMILY with elements of horror

The Night of the Living Duck is a 1988 animated short film starring Daffy Duck. It also appears as the opening sequence of Daffy Duck’s Quackbusters.

The Night of the Living Duck (a Merrie Melodies) was the second theatrical animated short produced by Warner Bros. after a 20-year dry spell, and it also appeared theatrically with the film Gorillas in the Mist: The Story of Dian Fossey. It was also the last Warner Bros. cartoon short to feature the voice of Mel Blanc.

Daffy Duck (Mel Blanc) is reading a monster comic book that ends in a cliffhanger. While rifling through his bookcase for the next issue, an ugly, decorative stone idol falls from the shelf and conks him on the head. Daffy, of course, falls into a dream in which he is a lounge singer at a nightclub for monsters. The club patrons include such classic Universal Monsters as Dracula, Frankenstein, The Wolfman, and the Creature from the Black Lagoon, as well as other film maniacs such as Leatherface from The Texas Chainsaw Massacre and Godzilla. When Daffy finds that the customers aren’t happy with his act, he sprays his throat with Eau de Torme and entertains his audience with a rendition of “Monsters Lead Such Interesting Lives” in a voice that sounds just like Mel Tormé’s!

Like its predecessor, The Duxorcist, The Night of the Living Duck is actually quite entertaining. In terms of story, it isn’t as good as the best Looney Tunes or Merrie Melodies, but it would make the B-list. The animation, however, is only as good as the least of Warner’s theatrical shorts, but the truth is that the art of classic hand drawn animated shorts is lost. Still, The Night of the Living Duck has its moments. While Mel Blanc’s voice was worn down by the time he worked on this short, Mel Tormé’s turn as Daffy Duck’s singing voice is priceless and is the element that keeps this cartoon from being run-of-the-mill.