Ultimate Avengers: The Movie is Quite Groovy 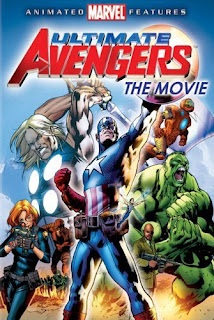 Marvel Comics formed a partnership with Lions Gate Film to produce direct-to-video (DVD) animated films for the home entertainment market. The first, Ultimate Avengers: The Movie, was released to DVD in late February 2006. Although the movie is entitled Ultimate Avengers, it has its origins in the long-running Marvel comic book series, The Avengers, which debuted in 1963 and was created by Stan Lee and Jack Kirby.

This particular animated movie is based upon and takes its story, characters, and concepts from the comic book, The Ultimates, a popular updating, re-imagining, and reworking of The Avengers by writer Mark Millar and artist Bryan Hitch, which was first published in late 2000. It also features a character created in the 1940’s by Joe Simon and Jack Kirby, Captain America.

At the close of World War II, super soldier Captain America (Justin Gross) leads American soldiers behind enemy lines to destroy a Nazi atomic weapon aimed at the United States. The Captain’s heroics, however, cost him his life as he falls from the sky after destroying the missile and plunges into the ocean depths… or does it? The American secret agent organization, SHIELD, finds Captain America frozen beneath the oceans, and the agency’s scientists, led by Bruce Banner (Michael Massee) and Dr. Betty Ross (Nan McNamara), are able to revive him.

Nick Fury (Andre Ware), the head of SHIELD, then, recruits Captain America to lead a team of surly superhero recruits, including Iron Man (Marc Worden), Thor (David Boat), the Wasp (Grey DeLisle), her husband Giant Man (Nolan North) in an all-out war against sinister alien forces that have been threatening humanity for decades. Now, the monsters are making their big aggressive move against Earth. However, as the Captain’s new team struggles to defeat their enemy, The Hulk (Frank Tatasciore) is about to crash the party.

I liked Ultimate Avengers. It’s a rollicking, high-octane adventure that rivals big budget Hollywood live action adventure movies. The visual look of the film, especially in the character design will remind some viewers of the old “G.I. Joe” animated series from the 1980’s or the “X-Men Evolution” animated series that ran for four seasons on The WB television network. The character animation is occasionally clunky – especially during quiet dramatic moments. When the characters are moving quickly and fighting, they look good. When they walk, they move awkwardly. This isn’t feature animation on the level of Disney, DreamWorks, or any of the big Hollywood studios that still do hand drawn animated features, but who would expect that level of animation from a direct-to-video cartoon?

But the film still looks quite good; except for some moments, I thought the animation was just fine. In the end, the important thing is how good this is at being superhero entertainment, and Ultimate Avengers wildly succeeds; action, adventure, fights, explosions, superhero melodrama, and cool CGI flying craft: this is good stuff. When The Hulk makes his long-awaited appearance in the third act, Ultimate Avengers hits the ceiling. Just the Hulk tearing across the screen taking on everyone is an amazing spectacle. You have to see him take on his teammates to believe how awesome a great superhero slugfest can be when it’s given the movement of film and Guy Michelmore’s near-perfect comic book movie score.

People who read comics long ago will find much in this in which to delight, although some hardcore fans will not be pleased that the film strays from the comic books in some aspects. Still, Ultimate Avengers recalls that old feeling of what it was to kick back and enjoy reading a comic book.