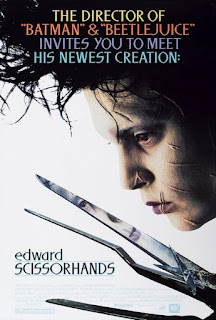 A romantic fantasy, the film opens with an elderly woman telling her granddaughter where the snow outside their window comes from (because they live in an area in which snow is not common). That story begins when a local Avon saleswoman, Peg Boggs (Dianne Wiest) visits a Gothic mansion that sits on a hill just outside her suburban neighborhood. She finds Edward (Tim Burton) hiding in the castle. Edward is a mechanical young man created by an old inventor (Vincent Price), and he has scissor-like contraptions where his wrists and hands should be.

Peg takes Edward home where he befriends her son, Kevin (Robert Oliveri), meets her husband, Bill (Alan Arkin), and later meets and falls in love with her teen daughter, Kim (Winona Ryder). At first Edward fits right in with the family, and the neighbors also take to him, especially after they discover that he has skills they can put to use. However, petty jealousies, simple misunderstandings, and selfish interests soon make it difficult and dangerous for both the Boggs and Edward.

Critics and movie fans have described Edward Scissorhands as Tim Burton’s most personal film. According to the 2006 book, Burton on Burton (by author Mark Salisbury), the title character of Edward Scissorhands comes out of a teenaged Burton’s feelings of isolation and also his inability to fit in and to communicate with the people in the suburb where he grew up. The more I saw of Burton and of his work, both films and illustrations, the more Edward Scissorhands’ themes of self-discovery and isolation made sense to me. I can see Burton, a Goth-type teen with his strange drawings and stranger looks, not exactly fitting in with the conformity zone that suburban areas are (at least on the surface, cause there’s no telling what goes on behind closed doors).

Seriously though, I think Edward Scissorhands goes beyond mere commentary about familiar suburban vs. rebel themes. In the film, the Boggs live in a drab suburban world that manages to make even the pastel colors that blanket the wood frame homes seem dull and boring. When Edward comes into the Boggs’ world, it isn’t so much that he is a breath of fresh air. It is that he becomes a novelty act, and he is accepted, for the most part, as long has his talents are of use to his new neighbors and as long he entertains. The black-garbed Edward is the proverbial Negro in a white bougie woodpile.

Edward, although he is a mechanical boy, has a good soul and has an open spirit. He isn’t clueless, as throughout the film, we can observe how quickly Edward learns. He has a surprising sense of humor, born of the way he can see past the façades people put forth. The problem for Edward is that he is open-minded or, at least, open to new experiences; his neighbors are not.

In this film’s last act, the neighbors reveal themselves for what they really are – a white citizens council, a lynch mob willfully ignoring any truths so that they can kill someone. They want an excuse, any excuse, to get out the torches and pitchforks. Hell, when it comes down to it, they don’t really need an excuse. It is not a coincidence that the most understanding and sympathetic person to Edward, outside the Boggs, is an African-American police officer played by the late Dick Anthony Williams (who died in February of this year.)