Ethan Hawke and Selena Gomez to Star in "Getaway" 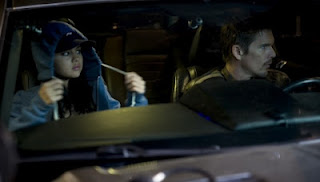 (Selena Gomez and Ethan Hawke in a photograph from Dark Castle Entertainment and After Dark Films' upcoming feature, Getaway.  Photo by Simon Varsano.)
Filming is Underway on “Getaway”

Ethan Hawke, Selena Gomez and Jon Voight star in the thriller from Dark Castle Entertainment and After Dark Films

Courtney Solomon (“An American Haunting”) and Yaron Levy (director of photography on “Transit”) are teaming to direct “Getaway.” Solomon is also producing the film, together with Moshe Diamant and Chris Milburn. The executive producers are Joel Silver, Alan Zeman and Steve Richards. The screenplay is by Gregg Maxwell Parker and Sean Finegan, with the latter also serving as co-producer.

Ethan Hawke plays Brent Magna, a burned out race car driver who is thrust into a do-or-die mission behind the wheel when his wife is kidnapped. With Brent’s only ally a young hacker (Selena Gomez), his one hope of saving his wife is to follow the orders of the mysterious voice (Jon Voight) who’s watching his every move through cameras mounted on the car Brent’s driving.

The film will be distributed by Warner Bros. Pictures, a Warner Bros. Entertainment Company.
Posted by Leroy Douresseaux at 11:39 AM