Antonio Banderas Stomps the Yard in "Puss in Boots" 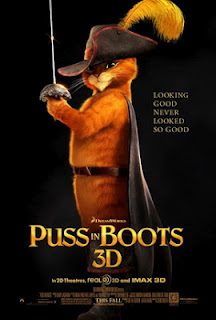 ANIMATION/FANTASY/ADVENTURE/COMEDY with elements of a Western

I don’t think DreamWorks Animation gets enough credit. They aren’t a weak sister to Pixar Animation Studios. In fact, in 2011, Pixar unleashed the god-awful Cars 2, but DreamWorks more than surpassed that with two excellent films, Kung Fu Panda 2 and the subject of this movie review…

Puss in Boots is a 2011 computer-animated adventure comedy film from DreamWorks Animation. The film stars Antonio Banderas, giving voice to the outlaw cat, Puss in Boots, the character that first appeared in Shrek 2 (2004). Puss in Boots the movie is both a spin-off of and prequel to the Shrek film franchise.

The story details the origins of Puss in Boots (Antonio Banderas) and tells how he became an outlaw. He was an orphaned kitten who finds a home at an orphanage run by the kind Imelda (Constance Marie) in the town of San Ricardo. While attempting to steal magic beans (from “Jack and the Beanstalk), Puss is reunited with his long-estranged childhood friend, the talking egg Humpty Alexander Dumpty (Zach Galifianakis). Puss is drawn to Humpty’s ally, Kitty Softpaws (Salma Hayek), a street-savvy Tuxedo cat.

The trio hatches a plan to steal the beans from the current owners, the outlaw couple, Jack (Billy Bob Thorton) and Jill (Amy Sedaris). The task, however, proves more difficult than Puss imagined, as he must survive a strange world and also a plot against his loved ones.

Part Zorro and part Valentino, Puss in Boots is a charming rogue, the kind of character that can drive a swashbuckling adventure film to success. Puss in Boots the movie is part Raiders of the Lost Ark with the style of a spaghetti Western plus the cracked fairy tale approach that defined the Shrek movies.

Puss in Boots isn’t groundbreaking, nor is it as technically dazzling as other DreamWorks Animations films, such as the Kung Fu Panda films and Megamind. Puss in Boots does, however, have enough bubbly charm and effervescence to share with less fortunate films.

Those less fortunate films would be movies that don’t have Antonio Banderas, an actor born to be loved by the camera, or, in the case of voice acting in an animated film, an actor with a bejeweled voice. Together with the artists that animated the Puss in Boots character, Banderas turned on the wit and magnetism, so that Puss in Boots virtually has no faults – as long as Puss in Boots is the center of attention. I appreciate the people involved with this movie, because I plan on watching Puss in Boots many more times.