Review: Everything About "The Royal Tenenbaums" is Wonderful (Happy B'day, Wes Anderson) 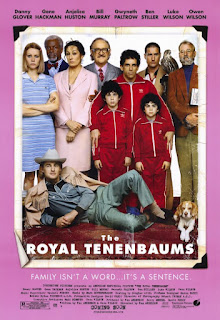 The subject of this movie review is The Royal Tenenbaums, the 2001 Oscar-nominated comedy and drama from director, Wes Anderson. The film follows siblings whose early success was mitigated by their eccentric father’s behavior. I love this film and…

Apparently, Rushmore was not a fluke.

When Royal O’Reilly Tenenbaum (Gene Hackman) announces that he is dying, his family slowly, painfully reunites. His wife Etheline “Ethel” Tenenbaum (Anjelica Huston) removed her philandering husband from the home over a decade prior to the beginning of the movie. Their three children are business whiz Chas (Ben Stiller), playwright Margot Helen (Gwyneth Paltrow), who is actually adopted, and Richie “Baumer” (Luke Wilson), who grew up to become a professional tennis champion. Family friend and unofficial fourth Tenenbaum child is Elijah “Eli” Cash (Owen Wilson), a novelist and a drug addict, who is also in love with Margot.

Royal would like to get in good with his family, again, but he left so many open wounds when Ethel exiled him. The Tenenbaum children were celebrated prodigies who have fallen on bad times. Chas, a single father of two boys and who lost his wife the previous year in a plane crash, despises his father. Margot is a playwright in limbo, and Richie’s suffered a meltdown during his last championship tennis match. Royal is also disturbed by his wife’s engagement to her accountant Henry Sherman (Danny Glover), and he wants desperately to connect with Chas’s sons, his grandsons. What unfolds is a touching, but unusual family drama/comedy.

Directed by Wes Anderson of the aforementioned Rushmore, The Royal Tenenbaums is a film with a conventional story, the family drama, filled with the usual comedy, familial intrigue, and requisite feuds. What makes this film so different from other family dramas is Anderson’s conviction and determination not to be like other filmmakers or not to deliver something that is nothing more than film industry product. His vision is unique, and his storytelling technique demands not only one’s attention but that one also engage the film.

Anderson is a visual stylist, but in a quite manner. His cinematographer, Robert D. Yeoman has worked on Anderson’s other films and contributes a peculiar color palette that resembles Technicolor, but is merged with clean, earth tones. Tenenbaums has a dreamlike quality with a slight breath of realism. It’s eye candy, but doesn’t distract from the story; in fact, it keeps one attentive to what the camera reveals. Unlike many directors who are visually sharp by way of quick cuts and editing, Anderson doesn’t mind allowing his camera to linger on and to follow his characters.

The script by Anderson and Tenenbaum co-star Owen Wilson is filled with idiosyncrasies, but is, nevertheless, a story about a family and the damage family members do to one another. We’ve seen it before, but unlike American Beauty, Tenenbaums really manages to tell a familiar story in a unique and special way.

The performances are subtle and nuanced even as the characters appear to be over the top. We know that Gene Hackman is good, but he has a knack for giving range to familiar character types. His performances nearly always hint at characters that have lived long lives before their respective movies begin. Royal is like a book, and Hackman makes the mental exercise that it takes to figure out Royal worth it.

Gwyneth Paltrow continues to reveal the scope of her abilities. She is a classic film pretty face, but with the acting chops of serious thespian. Owen Wilson is his usual wacky self; he manages to be self-confident and endearing even when playing a not too bright character. However, the surprise here is his brother Luke Wilson. Even through dark glasses, he makes his eyes the windows to the soul of his troubled character. He is the film’s mystery man, and he is the sum of his family’s troubles. Wilson doesn’t miss a beat while carrying this burden.

The Royal Tenenbaums is filled with wonderful acting, directing, story telling. Too make such an offbeat clan and their associates so lovable, charming, and fun to follow is no minor feat. Anderson takes the ordinary and makes it extraordinary. Truly, he does it like few before him. Bravo!

We get all this and a wonderful voiceover narration by Alec Baldwin.

Posted by Leroy Douresseaux at 2:05 PM