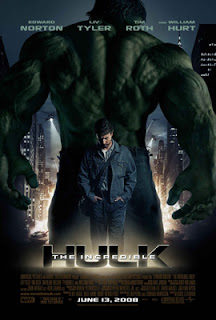 After the box office and critical disappointment that was the 2003 film, The Hulk, directed by Ang Lee (Brokeback Mountain), the people at Marvel Entertainment, which publishes Hulk comic books through Marvel Comics, believed that they could make a more successful Hulk flick. Five years later, Marvel Studios is making its own films from its comic book characters (like the recent box office smash, Iron Man). Now, Marvel finally has the chance to do the Hulk right, and Marvel certainly gets it right with The Incredible Hulk, a movie that offers a raging good time.

Hiding in Brazil, scientist Bruce Banner (Edward Norton) desperately hunts for a cure for the gamma radiation that has not only poisoned his cells, but when he becomes angry also transforms him into that unbridled, green force of rage, The Hulk. Banner lives in the shadows, cut off from the life he knew and the woman he loves, Betty Ross (Liv Tyler). Banner has been secretly corresponding with another scientist back in the U.S., but he accidentally alerts the U.S. military to his whereabouts. Soon, Banner’s old nemesis and Betty’s father, General Thaddeus “Thunderbolt” Ross (William Hurt), is leading a special operations force to capture Banner. Ross wants to dissect Banner until he learns the secrets inside him that turn him into the Hulk.

This time around, General Ross has the assistance of a Russian-born, British mercenary, Emil Blonsky (Tim Roth). When Ross and Blonsky find Banner upon his return to America to meet Betty, it starts a confrontation that leads to Banner becoming the Hulk. Determined to match the power of the Hulk, Blonsky agrees to submit his body to the same kind of weird science that created the Hulk. Now, Blonsky has turned himself into an “Abomination,” and heads to New York City for a final showdown with The Incredible Hulk.

The Incredible Hulk is an incredibly entertaining film… when the Hulk is onscreen. In that way, this movie is a bit strange. The dramatic bits – relationships, conflicts, dialogue – are very slow. There are times when The Incredible Hulk elicits neither interest nor disinterest. I found myself sitting in the theatre watching a movie, and I felt the same as if I were merely watching eggs boil.

Then, Mr. Hulk shows up, and The Incredible Hulk just freakin’ explodes with energy. When this green behemoth is onscreen, this movie is so much more fun. I could feel the power; it was as if the angrier the Hulk became, the more I enjoyed the movie. That’s scary, but maybe the secret to making a good Hulk movie is to make it scary. The Hulk is monster; unleashed and angry, he’s is destruction, damage, and devastation.

This untamed and fierce force of nature is the result of some great special effects and CGI work. They got it right. When the Hulk rages, flexes, and roars, we should be scared, and the visual effects guys gave the movie just what it needed. Yes, this CGI Hulk steals the show from the actors – especially Ed Norton, who is such a fine actor. Yet Norton doesn’t really get much traction in this film – especially considering that we’re here for the Hulk show. Evidence suggests that Norton is indeed upset that too much of his thespian magic was left out of the final cut of this film, so he can’t shine and has to take second place to a computer created character.

But The Incredible Hulk is really about… the Incredible Hulk. Boy does this green monster make the most of his onscreen time. The action is big, violent, and not so dumb that it can’t figure out a way to smash your head in.