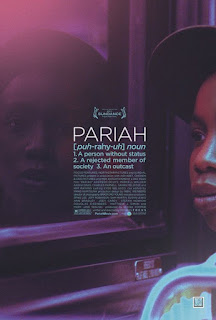 Pariah is a 2011 independent film from director Dee Rees. This contemporary drama is a coming of age story about a Brooklyn teen discovering her sexual identity, while negotiating her way through the very different worlds of the lesbian club scene and of her conservative family. Filmmaker Spike Lee is one of the film’s executive producers.

Alike is gradually embracing her identity as a lesbian, with her openly gay friend, Laura (Pernell Walker), as her guide and support. At home, however, her parents’ marriage has reached a breaking point, and the tension grows whenever her parents discuss her development as a person. When she begins to socialize with Bina (Aasha Davis), a young woman who attends her high school, Alike starts to feel better about her identity, but her family and her social life only grow more complicated.

The easy way out of this review is to say that Pariah is an amazing film, because, y’all, it surely is. I cannot think of a film that deals with the black gay teen experience as well as Pariah does, and if there is one, all the better. The comic actress, Kim Wayans, as other members of the Wayans clan have done, takes a moment to show the range and scope of her talent with a dramatic turn as Alike’s mother, Audrey, that is rich in pathos.

If this movie is a revelation (and it is), then, it is all the more a surprise because Adepero Oduye as Alike Freeman is an illumination casting much needed light on the corporate product landscape that is the American film industry. As Alike blossoms, as a young adult and as a young artist, Adepero grows onscreen before our eyes. The joy we see in Alike as she becomes more confident and assured in the choices that she makes, the more Adepero seizes command of this film.

Adepero has a winning, Tom Cruise-like smile. Dee Rees has made a winning film that will make you smile like Tom Cruise. This film promises a lot in terms of Rees talent. If by chance she doesn’t live up to it that will be understandable. Pariah is a fine film and will certainly be a hard act to follow.