"Rise of the Planet of the Apes" Shockingly Good 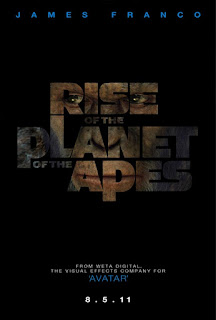 Instead, 20th Century Fox decided to reboot the franchise. Rise of the Planet of the Apes, a 2011 science fiction drama film, is reportedly intended to act as the origin story for a new series. Rise of the Planet of the Apes focuses on a hyper-intelligent chimpanzee who leads his fellow apes on a revolutionary path that introduces them to freedom and to intelligence that they have never known.

Rise of the Planet of the Apes is set in modern-day San Francisco, which is also the location of biotechnology company, Gen-Sys. There, Dr. William “Will” Rodman (James Franco) is working on a cure for Alzheimer’s disease, which is personal to him because his father, Charles Rodman (John Lithgow), has the disease. Will is testing his new gene therapy, ALZ-112, on chimpanzees, which seems to make them smarter.

One of them, a female, gives birth to a male chimp; to keep the baby from being destroyed, Will takes him home, where his father, who lives with him, names the baby, Caesar. Caesar’s intelligence grows by leaps and bounds, which eventually gets him into trouble. As Caesar (Andy Serkis) watches how the world treats him and his fellow apes, he plots a revolution that threatens the status quo.

Rise of the Planet of the Apes is a monkey movie! Seriously, this film is about the apes. The human characters sometimes come across as place holders for the apes, while the story takes a brief detour in human territory before going back to the characters it really loves – the apes. That is not to say that the human characters are not interesting, or that the actors do not give good performances. As usual, James Franco seems effortlessly good, and Freida Pinto is excellent as Will girlfriend and the film’s moral center and voice of warning, Caroline Aranha. David Oyelowo surprisingly steals scenes as Will’s greedy boss, Steven Jacobs. Also, I was surprised with how powerful John Lithgow is in the small role of Will’s father, Charles. You can’t help but feel sorry for Charles because Lithgow’s depiction of him suffering the ravages of Alzheimer’s disease has an uncanny ring of authenticity.

Rise of the Planet of the Apes is one of the great slave rebellion movies, and that is because of the film’s visual effects, which creates credible oppressed characters. CGI characters: characters created, rendered, and animated using computer software, often don’t hold up to intense scrutiny. The longer you look at them, the less they seem authentic and the more phony they look. The CGI apes here don’t have that problem because there aren’t a lot of times in this movie when I thought that the apes looked counterfeit or just plain fake (although there are a few).

Here, the apes are created using performance capture, which involves filming actors in special suits and then, taking that performance and building the CGI character on or over the performance. The technology of performance capture has evolved to the point that in Rise of the Planet of the Apes the apes show a wide range of emotions. The depth of character has delicacy rather than the gaudiness seemingly inherent in CGI characters in many live-action movies.

To that end, Andy Serkis, who provides the performance capture performance for Caesar, is overdue for some kind of special Oscar trophy. Caesar carries the movie as if he were a flesh and blood, acclaimed, veteran actor. He has that “It,” the x-factor that stars have. I happily followed Caesar through trials and tribulations and fought with him in the epic battle that girds the last act. Rise of the Planet of the Apes is a fantastic film because its star is an ape with star appeal. You’ll laugh and cry with Caesar; you’ll cheer him on.