Close, McTeer Do the Damn Thing in "Albert Nobbs" 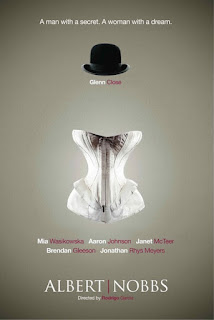 Albert Nobbs is a 2011 Irish period drama from director Rodrigo Garcia (Mother and Child). The film is based upon the 1918 short story “The Singular Life of Albert Nobbs” by the late Irish novelist, George Augustus Moore. The film stars Glenn Close as a woman who poses as a man in order to work at a motel in late 19th century Ireland,

Albert Nobbs (Glenn Close) was born a female in London. He has been posing as a man for 30 years in order to survive the harsh environment of the impoverished working class in the late 19th century. Albert works as a waiter in Morrison’s Hotel in Dublin, Ireland, and is known for his extreme dedication to his job. However, Albert begins to reconsider how he has lived when he meets Hubert Page (Janet McTeer), a strapping painter who is doing some work at the hotel.

With its lesbian, gay, bisexual, and transgender themes, Albert Nobbs is certainly one of the most intoxicating period dramas that I have ever seen. Even when I enjoy a period or costume drama, I often forget about them not long after watching them (like The King’s Speech), but I can’t stop thinking about Albert Nobbs. I think that this is because Albert Nobbs has a screenplay which is determined to keep the audience guessing about the actions and motivations of the characters, and this is true from the main characters down to the supporting characters with small speaking roles. The movie engages the viewer in a guessing game of why and how. Why does she do that? How does she do it? How does she get away with it?

Albert Nobbs is marked by excellent performances and two great performances: Glenn Close as Albert Nobbs and Janet McTeer as Hubert Page. Close creates a compelling character in Nobbs by making the character’s fear that he will be caught a character itself. It is almost as if there are two characters: one is a waiter, and the other is a man whose secret-keeping is his life. As for McTeer, I don’t know if I have the words to describe her performance, which is a work of high art. I’ll just call it mega-awesome and leave it at that.

Albert Nobbs is a bit slow, but only a bit. I find that sometimes director Rodrigo García allows things to get too aloof and stiff, but he extracts passion and conflict from the kind of characters that like to keep things hidden and to act detached. However, the performances by Close and McTeer burn brightly enough to draw our attention to this unique film that depicts the diversity of relationships between women.