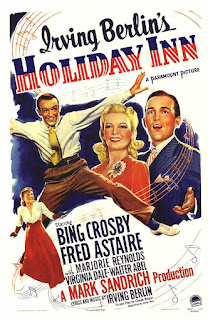 Holiday Inn is a 1942 musical, comedy and romance film from director Mark Sandrich.  The film is based on an idea by legendary American song writer and composer, Irving Berlin, who also wrote twelve songs specifically for this film.  The most famous of the film's songs is “White Christmas,” which went on to be the biggest hit record in the career of one of Holiday Inn's stars, Bing Crosby, and also the best selling record of all time.  Holiday Inn is set at an inn that is open only on holidays, and the story focuses on a love triangle involving a singer, a dancer, and a beautiful up-and-coming young female performer.

Holiday Inn opens on Christmas Eve at the Midnight Club in New York City.  Crooner (singer) Jim Hardy (Bing Crosby), hoofer (dancer) Ted Hanover (Fred Astaire), and signer-dancer Lila Dixon (Virginia Dale) have a popular musical act.  Jim plans for tonight to be his last performance.  He is retiring and moving to Midville, Connecticut where he will be a farmer.  Jim wants Lila to retire with him, and she has previously accepted his marriage proposal.  However, she has fallen in love with Ted and wants to continue working as his partner in a new act.  Jim accepts this and bids them goodbye.

Over the next year, Jim does not have much success running a farm.  So on Christmas Eve, a year after he retired, Jim is back in NYC.  He tells Ted and his agent, Danny Reed (Walter Abel), that he wants to turn the farm into an entertainment venue that opens only on holidays.  He has named it the “Holiday Inn.”  Ted and Danny are amused at the idea, and Ted is not interested in performing there.

However, Linda Mason (Marjorie Reynolds), an aspiring young singer and dancer, does find her way to the Holiday Inn.  There, she finds Jim, his African-American housekeeper, Mamie (Louise Beavers), and her two small children, son Vanderbilt (Shelby Bacon) and daughter Daphne (Joan Arnold).  The homey feeling that permeates the Inn and Jim's new song, “White Christmas,” convince Linda to stay.  But old rivals are conspiring to return and ruin Jim's plans again.

First, I have to be honest with you, dear readers.  I never really watched very much of those Bing Crosby holiday television specials that ran decades ago and now, still occasionally pop up on vintage TV channels.  I do, however, love to watch the films in which he appeared.  The man dazzles me, and I just love his singing voice.  He doesn't need to try hard; he seems to be amazing just naturally.

Watching Holiday Inn for the first time just recently also gave me a chance to really start to appreciate Fred Astaire.  He's amazing on film, and now, I see why the late “King of Pop,” Michael Jackson, was such a fan of his.  It's the same as Crosby – he doesn't even have to try hard.  Astaire just seems naturally an incredible dancer and performer.

The production values on Holiday Inn are beautiful, obviously so even in black and white.  In fact, Holiday Inn features some of the most beautiful and sharp black and white photography that I have ever seen in a Golden Age Hollywood film.  Director Mark Sandrich, a highly respected director in his day, makes this simple story, with its nonsensical plots and narrative, seem like it is almost high art.

Crosby and Astaire's co-stars, Marjorie Reynolds (as Linda) and Virginia Dale (as Lila), are also delightful, especially Reynolds in a larger role than Dale's.  Reynolds makes Linda seem like the equal, in terms of stage performance, of both Jim and Ted.  They bring Irving Berlin's wonderful songs to life with the kind of professionalism and skill that makes such songs into hits or at least into memorable tunes.  Besides the great “White Christmas,” there are a number of stand-out songs in this film, such as “Happy Holiday” and “Be Careful, It's My Heart.”

Like some Hollywood films from the first half of the twentieth-century, Holiday Inn has characters in “blackface,” which is when White actors blacken their face to play racist and stereotypical caricatures of Black people.  In this film, it occurs during the “Lincoln's Birthday” holiday performance when Crosby's Jim and Reynold's Linda perform a song called “Abraham.”  Crosby's blackface makeup is not the worst that I have seen, but Reynold's get-up, a sort of female “picaninny” with fake ponytails radiating from her head like sunbeams, is horrible.  However, the song “Abraham” is weak, and the sequence in which it is performed is forgettable.  Honestly, I had forgotten the song, the performance, and the blackface less than a minute after it finished.

Posted by Leroy Douresseaux at 4:56 AM