Review: Walt Disney's "TARZAN" is Something Old, Something New, and Sometimes Amazing 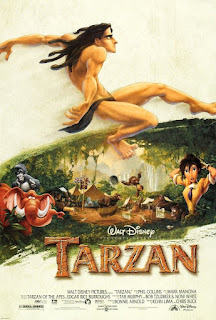 TRASH IN MY EYE No. 114 (of 2004) by Leroy Douresseaux
Tarzan (1999)
Running time:  88 minutes ( hour, 28 minutes)
MPAA – G
DIRECTORS:  Chris Buck and Kevin Lima
WRITERS:  Tab Murphy and Bob Tzudiker & Noni White; from a story by numerous writers (based upon the Edgar Rice Burroughs novel Tarzan of the Apes)
PRODUCER:  Bonnie Arnold
EDITOR:  Gregory Perler
COMPOSER:  Mark Mancina
SONGS:  Phil Collins
Academy Award winner
ANIMATION/ACTION/ADVENTURE/FAMILY
Starring:  (voices) Tony Goldwyn, Minnie Driver, Glenn Close, Brian Blessed, Lance Henriksen, Wayne Knight, Alex D. Linz, Rosie O’Donnell, and Nigel Hawthorne
The subject of this movie review is Tarzan, a 1999 animation fantasy-adventure film and musical directed by Chris Buck and Kevin Lima.  The film is based on Tarzan of the Apes, the first Tarzan novel written by Tarzan creator, Edgar Rice Burroughs.  Walt Disney’s Tarzan focuses on a man who was raised by gorillas, but who must decide where he really belongs when he discovers that he is a human.
Tarzan, Walt Disney’s animated version of Edgar Rice Burroughs’ classic character Tarzan, was one of the best films of the year 1999.  In fact, it was better than the Academy Award winner for Best Picture that year, American Beauty.  Many film fans and critics point to 1989’s The Little Mermaid as Disney’s return to the kind of high quality animation that made the studio so famous from the later 1930’s to the early 1950’s.  From 1989 to 2004 (when Disney stopped making feature length animated films for theatrical release, for the foreseeable future), Tarzan stands as a high water mark, being one of the best efforts of that second golden age of Disney animation (known as the “Disney Renaissance”).
However, the film isn’t just a great effort in animation, it’s also a great film, period.  Like classic Disney films, there is something for everyone.  The drama, humor, action, and adventure reach across generations to entertain anyone, especially if adults have open minds about opening up to the story of an animated film.
In this version of the classic tale, the gorilla Kala (Glenn Close) rescues an orphaned human after she finds its parents’ murdered bodies.  She names him Tarzan (Alex D. Linz) and takes him as her own because she is left childless after a leopard killed her infant.  Years later, the adult Tarzan (Tony Goldwyn) discovers he is human when he falls in love with Jane Porter (Minnie Driver), who comes to Tarzan’s jungle home with her father, Professor Porter (Nigel Hawthorne).  His love for Jane forces Tarzan to decide where he belongs when he has to choose between staying with his gorilla family or following Jane back to England.
Unlike many Disney animated films, Tarzan is thoroughly a boys’ action/adventure tale filled as it is with jungle chases over trees and through dense foliage and with combat fought to the death.  He is a boy’s man, having fun all day, surfing by his feet over thick and long tree branches, and he’s a whirling dervish of flips, twists, spins, leaps, dives, etc.  The film is, however, also quite poignant in its drama, particularly in the romance between Tarzan and Jane and in the relationship between Tarzan and his mother, Kala.
What would a Disney cartoon be without laughter and songs?  There is plenty of humor, some of it surprisingly provided by Rosie O’Donnell as Tarzan’s gorilla playmate, Terk (performed when she was still the “Queen of Nice.”).  The musical score is also very good, soaring and emotional.  However, it is Phil Collins’ song score that really makes the film, and Collins finally won his long sought after “Best Music, Original Song” Oscar® for a track entitled, “You’ll Be in My Heart.”
9 of 10
A+
NOTES:
2000 Academy Awards, USA:  1 win: “Best Music, Original Song” (Phil Collins for the song “You'll Be In My Heart”)
2000 Golden Globes, USA:  1 win: “Best Original Song - Motion Picture” (Phil Collins for the song “You'll Be In My Heart”)
Updated:  Saturday, August 02, 2014
The text is copyright © 2014 Leroy Douresseaux. All Rights Reserved. Contact this site for syndication rights and fees.
-----------------------
Amazon wants me to inform you that the link below is a PAID AD, but I technically only get paid (eventually) if you click on the ad below AND buy something(s).
Posted by Leroy Douresseaux at 10:16 AM