Comics Review: "JENNIFER BLOOD Volume 2 #3" is All Fun and Games ... and Death 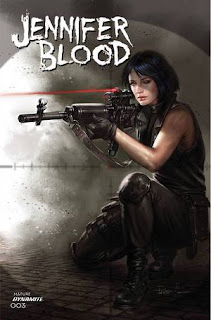 Jennifer Blood is a a comic book character created by writer Garth Ennis and artist Adriano Batista.  A suburban wife and mother by day, Jennifer Blood is a ruthless vigilante by night.  Born “Jessica Blute,” she took her mother's first name, Jennifer, and created the alter ego, “Jennifer Blood, and sought revenge against her father's family for the death of her parents.  The first Jennifer Blood comic book series ran for 36 issues from 2011 to 2014.

Jennifer Blood returns from the dead in a new comic book series, Jennifer Blood Volume 2.  It is written by Fred Van Lente; drawn by Vincenzo Federici; colored by Dearbhla Kelly and lettered by Simon Bowland.  In the new series, someone is acting like Jennifer Blood, who is supposedly dead.  And this “copycat” loves to kill criminals just like the original did.

Jennifer Blood Volume 2 #3 (“Play Date”) opens outside of Bountiful, Utah, population 4302 – a town run by and for criminals.  Bountiful is where the U.S. Department of Justice sends the most infamous East Coast mobsters into the federal “Witness Protection Program” (WPP).  One of the criminals enjoying life in Bountiful is former drug trafficker and Border Patrol agent turned heroin smugger, Marco Martinez.  Today, he has delivered a U-Haul truckload of Spanish-speaking migrants to an abandoned army base located outside Bountiful.

These migrants believe that they are beginning a new life, but they're actually here to be targets.  The Mafia dons of the criminal-run town of Bountiful have gathered together for “the Hunt,” the annual event that pits the East Coast mob against the West Coast mob to see who can track down, kill, and tag these innocent, unknowing human.

In this most dangerous game, however, a third player has entered this year's competition: Jennifer Blood!  Her targets are the mobsters and she plays for keeps.  Now, mob assassin, Giulietta Romeo, will at last come face to face with her elusive prey.

THE LOWDOWN:  Dynamite Entertainment's marketing department recently began providing me with PDF review copies of some of their titles.  One of them is Jennifer Blood Volume 2 #3.  This is the third Jennifer Blood comic book I have read, although I had previously heard of the series.

I'll say the same thing about Jennifer Blood Volume 2 #3 that I said about the first two issues.  It's a fun read and a funny read.  Writer Fred Van Lente offers his best issue yet.  In fact, I could read a miniseries worth of this issue, and I enjoyed the confrontation between Blood and Romeo.

The art and storytelling by Vincenzo Federici perfectly fits this stories emphasis on cruelty and bigotry, and the colors by Dearbhla Kelly splash tag-colors and gore all over the pages.  Simon Bowland's lettering continues to be the soundtrack of sacrifice to mob violence and bloody revenge.  So let's keep going, dear readers.  Jennifer Blood is turning out to be quite good.