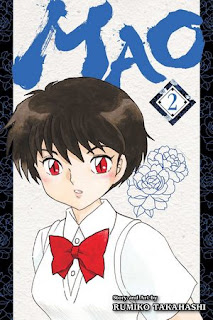 Mao is a Japanese manga series written and illustrated by Rumiko Takahashi.  It has been serialized in the Japanese manga magazine, Weekly Shōnen Sunday, since May 2019.  In September 2021, VIZ Media began publishing an English-language edition of Mao as a series of paperback graphic novels under its “Shonen Sunday” imprint.

Mao focuses on 15-year-old Nanoka Kiba.  Eight years ago, she was in a mysterious car accident in which she and her parents died, but Nanoka continues to live on.  One day, while visiting the shopping alley on Fifth Street, Nanoka inadvertently enters a portal that transports her back to Japan's Taisho era.  There, Nanoka meets a young-looking exorcist named Mao and his helper, Otoya, a shikigami that resembles a small boy.  As they try to discover what thread of fate connects them, they'll kick demon butt along the way.

As Mao, Vol. 2 (Chapters 1 to 10) opens, Nanoka, Mao, and Otoya investigate the strange cult of Priestess Shoko in hopes of bringing her to justice.  However, diabolical forces surround her, and they will kill anyone who stand in their way.  Meanwhile, Shoko reveals a shocking doomsday prophecy.  Later, Nanoka and her friend, the boy who wants to date her, Shiraha, do some historical research and discover a cataclysmic event that is yet to occur in Mao's timeline.

THE LOWDOWN:  The Mao manga is the latest multi-genre manga from Rumiko
Takahashi.  As usual, this title pairs a young female touched by the supernatural with a youngish male whose trade is in the supernatural.

Mao Graphic Novel Volume 2 finds Nanoka hopping back and forth between timelines.  She and Mao investigate all manner of demons.  Meanwhile, a historical disaster connects the two different worlds in which they live, but history may not be entirely correct about the details of event.  The Princess Shoko story arc reveals that while both their personalities and their methods sometimes clash, Nanoka and Mao are actually a rather nice match.

As she did in the first volume, Shaenon Garrity once again offers an English-language adaptation that is a delightful read, capturing the magic that infuses this volume and also the curious and inquisitive nature of Nanoka.  I couldn't stop reading Mao Vol. 1, and by the time I finished Vol. 2, I really wanted to read more.  I heartily recommend this series to any fans of supernatural fantasy comics and graphic novels even if they have never previously read Rumiko Takahashi.