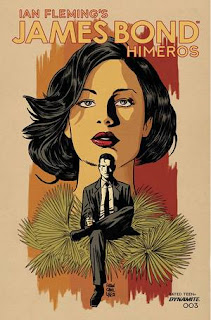 Over the past 50+ years, Bond has made sporadic appearances in comic books, but Dynamite Entertainment has been steadily publishing James Bond comic books since early 2016.  Their latest James Bond comic book is James Bond: Himeros.  It is written by Rodney Barnes; drawn by Pierluigi Minotti; colored by Adriano Augusto; and lettered by Social Myth Studios.  In Himeros, 007 finds himself caught in a web of powerful people who will kill to keep their child sex trafficking secrets from coming to light.

James Bond: Himeros #3 opens in James Bond's memory – Thailand, three years ago.  He has dealt with sex traffickers in the past.  Now, he must uncover new horrors via billionaire financier and notorious sex trafficker, Richard Wilhelm, who was killed in Her Majesty's Prison Belmarsh, London.  But Wilhelm's secrets did not die with him.

Now, Wilhelm's right hand man, Sarah Richmond, is the target of arms dealer, Anton Bates, who enjoyed the sex services Wilhelm provided and wants Richmond dead.  Bond is very good at what he does, including protection, but Bates' assassin Kino is proving hard to shake and more than capable of killing Richmond … and Bond.

THE LOWDOWN:  Dynamite Entertainment's marketing department recently began providing me with PDF review copies of some of their titles.  One of them is James Bond: Himeros #3, which is one of several Dynamite James Bond comic books I've read.

Writer Rodney Barnes has been slowly building this series.  In Himeros #3, he moves the story off simmer and throws some gasoline on the fire of that story.  From the rumbling volcano of a back story to the the race to escape Miami, Barnes deals in hot, hot, hot.

Last issue, artist Antonio Ruso's art and storytelling came at the readers like lightning-quick punches, capturing all the surprising kinetic action.  Now, the new artist, Pierluigi Minotti, comes with a can of gas to add to Barnes' fuel.  I like this change; it does not disrupt the story and Minotti's art has a style similar to the great Eduardo Risso's (100 Bullets).  Adriano Augusto's colors fit right in with the new artist, capturing both the moods of traditional James Bond fiction and the story's new heat.  “Himeros” is the Greek god of sexual desire, and after reading James Bond: Himeros #3,  dear readers, I desire that you desire it.