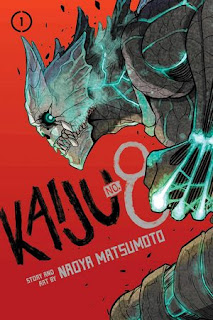 Kaiju No. 8 is a Japanese manga series written and illustrated by Naoya Matsumoto.  It has been serialized for free on Shueisha's Shōnen Jump+ application and website since July 2020.  VIZ Media began publishing an English-language edition of the manga as series of paperback graphic novels under its “Shonen Jump” imprint in December 2021

Kaiju No. 8, Vol. 1 (Chapters 1 to 7) opens up in a world where Japan is plagued by the giant monsters known as “kaiju.”  Thirty-two-year-old Kafka Hibino is a kaiju corpse cleanup man.  Kafka works for Monster Sweeper, Inc., a professional kaiju cleaning company, but he wishes that he was a member of the Japanese Defense Force, which is tasked with neutralizing kaiju.

Kafka and childhood friend, Mina Ashiro, both wanted to be members of the Defense Force.  Mina is now captain of the JDF's “Third Division” and has neutralized hundreds of kaiju.  Kafka is training a new part time worker, 18-year-old Reno Ichikawa, who is determined to take the JDF's exam to join the force as a kaiju fighter.  That inspires Kafka to revive his dream to join Mina in the Defense Force, but there is one serious complication.  Kafka has recently made the Defense Force's neutralization list as the kaiju code named Kaiju No. 8!

THE LOWDOWN:  The Kaiju No. 8 manga made its North American debut this month (Dec. 2021).  With its striking cover art, the first volume may tempt fans of kaiju comics to try it.

Kaiju No. 8 Graphic Novel Volume 1 offers a familiar scenario.  A hero is forced into becoming the very kind of monster that he fights, or, in the case of Kafka Hibino, the very monsters which he cleans-up after.  Rather than treating his lead character as tragic, creator Naoya Matsumoto creates a comedy in which the hero makes the best of the situation.  That will probably lead to enough imaginative comic scenarios to keep Kaiju No. 8 running for several volumes, at least.

The translation by David Evelyn captures the moods, styles, and elements in which the manga plies its narrative trade.  Right now, the story focuses on the nastiness of Kafka's job, his growing friendship with Reno, the rigors of training, and how he faces becoming a kaiju.  So far, I like that Kafka is making the best of it.  Maybe, this manga will ultimately be about a hero who overcomes obstacles.

I READS YOU RECOMMENDS:  Fans of kaiju manga will want to read the Shonen Jump title, Kaiju No. 8.

Posted by Leroy Douresseaux at 12:58 PM