Comics Review: "DARK BLOOD #5" is Simply So Much Fun to Read 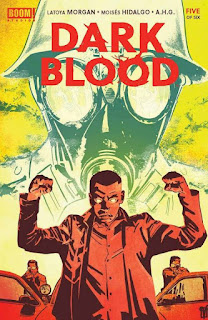 Dark Blood is a new six-issue comic book miniseries created and written by screenwriter LaToya Morgan (AMC’s “The Walking Dead,” “Into The Badlands”).  Published by BOOM! Studios, the series is drawn by Moisés Hidalgo and Walt Barna; colored by A.H.G.; and lettered by Andworld Design.  The series focuses on a Black World War II veteran who discovers that he has strange powers.

Dark Blood #5 opens in 1955 – the Night of the Variance.  But this night feels the weight of a time a decade earlier when World War II servicemen, Avery and Henderson, two pilots of the Red Tails, face injustice masquerading as justice in Austria.  Oh, how it resembles the same process of injustice in the United States.  What happened that night may have laid the groundwork for Avery's situation now.

What Avery discovered about himself six weeks before the Night of Variance seemed like a good thing, but this night, there is horror and there must be a reckoning.  As Avery's condition continues to manifest and become more intense, is his search for answers merely going to lead him to something far worse?

THE LOWDOWN:  In Dark Blood, television writer-producer LaToya Morgan (AMC's “TURN: Washington's Spies”) offers a comic book that flows through multiple genres, including science fiction and fantasy, horror, and history.  It has layers and subtexts.  There is metaphor and symbolism and history made reality.  Morgan presents her readers with a beautiful and complex work.

On the other hand, I see the art of Moisés Hidalgo, who has been the regular artist on this series since the third issue.  I read his signs and graphics and symbolism, and I realize that Dark Blood #5 is just so much fun to read.  I feel like a kid again discovering something every time I read a new comic book or new issue of a favorite series.  Even if I were too ignorant to figure out the layers behind this story, Hidalgo turns this tale into a wild adventure of mad scientists, Nazis, and rotten cops.  It is pure escapism, and ain't nothing wrong with that.  Hell, Dark Blood #5 is the magic and the mystery of the Golden Age of Comics before busybodies ruined this outsider art form with the “Comics Code Authority (CCA) in 1954.

A.H.G.'s beautiful colors on Hidalgo's art makes this vintage mode (so to speak) feel so real.  I hope the upcoming final issue of Dark Blood also has a touch of escapist entertainment in it.  I also hope that it isn't the end...