Comics Review: "BLUBBER #5": Screwing Your Way to a 2-Day Pass 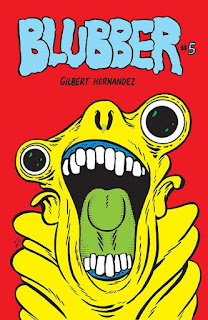 Gilbert Hernandez is the cartoonist, comic book creator, and graphic novelist best known for being one-half of the duo referred to as “Los Bros.”  Gilbert and his brother, Jaime Hernandez, are Eisner Award (Will Eisner Comics Industry Awards) winners, and they have produced the seminal, alternative comic book series, Love and Rockets (Fantagraphics Books), for the last four decades.

This black and white comic book series offers short stories and vignettes featuring a cast of misfits, monsters, and anthropomorphic types.  Beto also presents his usual mix of bizarre characters, strange stories, and outlandish sex and sexual acts, all hallmarks of his comic book output going back to the beginning of his early work.

Blubber #5 (which was released in 2019) is comprised of seven stories of one or two pages in length and three stories that are three pages and longer.  It also opens with the one-page comic inside the front cover (frontispiece) and ends with another story inside the back cover.  I'll discuss each story individually, to one extent or another.

THE LOWDOWN:  The inside the front cover story is entitled “Atom Baby Crunchers.”  It is about guys with balloon-like musculature, who are also well endowed in the penis department.  The one thing I like about this story is that everyone receives sexual pleasure, one way or another.

“Corazon”:
The first interior story stars a young character who appears to be female, has large breasts, and a penis (well-endowed) and a scrotum.  Corazon is always naked, even at work, where this story is set.  Corazon and a co-worker, Gronsky, must find their boss' old ink pens, which are missing, because he hates the new ones.  A co-worker, Cristobol, joins them.  The search involves dreams, remote viewing, water, a cult, and, of course, masturbation.  “Corazon” is one of Beto's usual surreal gems, which I generally enjoy, but I like this one especially because Beto isn't afraid to depict one guy sucking another guy's penis.

“Der Nimmy”:
Is this one-pager technically a furry story? Well, it involves sex and a human in a costume that resembles a large furry creature.  There is apparently also an appearance by Corazon.  No, honey.  Ain't nobody mad.

“Maximiliano's Huge Fuckin' Choad”:
This one-pager is about a guy, Maximiliano, with a long schlong who only enjoys satisfactory sex in a particular way.  Maximiliano also likes to have sex with “cryptids,” including the one that is featured on the cover of Blubber #5.  The fact that his story featured a form of coercive sex made me a little uncomfortable … but I got over it because it's Beto.

“Shitter”:
This two-pager features an office worker who enjoys clubbing, necrophilia, and coprophilia.  I like that Beto draws the gentleman's pubes as being neatly trimmed.

“It's Better to Die”:
In this six-page story, Corazon and two other balloon-breasted women travel through a land of faerie creatures such as fauns, kekeppy, and doogs.  They screw them and are screwed by them.  In this story, Beto shows off his incredible touch with figure drawing – human females and otherwise – and also his precise inking.  I don't know if he uses a brush to ink his art, but whatever he uses, he shows incredible dexterity with it.  “Tiki,” a diminutive, balloon-breasted woman, appears in this story.

“This Man, This Monster!”/”The Good Life”:
The cryptid featured on the cover appears in this story.  Blubber #5 has as a recurring plot element which indicates that having sex with a cryptid will earn someone a “2-way pass,” allowing them to travel between this world and the “Other Realm.”  “This Man, This Monster!” is a one-page comic that shares the page with a five-panel comic strip at the bottom of the page, entitled “The Good Life.”

“Tiki's Delivery Service”:
This two-page story features Tiki, the short of stature slash balloon of breasts woman.  She and Juevencio (who first appears in “Atom Baby Crunchers,” the story on the inside front cover) visit a place where men with low self-esteem are paid to allow others to alter, abuse, and use their penises.  Once again, Beto impresses with his ability to cartoon the penis – human and otherwise – in a variety of shapes, sizes, and lengths.

“See What You Made Me Do?”:
A woman named “Kolchak,” who has thick, muscular thighs has sex with a cryptid, hoping to earn herself a “2-way pass.”  However, taking it from a cryptid compels her to tell a secret – about a former boyfriend who was a serial killer.  Beto throws in a surprise with this story that makes the three-page “See What You Made Me Do?” rather delightful.

“Pupusi's Butthole”/Pupusi and Her Belly-Swelling Fetish”:
This is actually the title of a TV show that stars a Beto regular, Pupusi, who has appeared in a number of Beto's other works.  Beto introduces a new fetish, the love of “belly-swelling.”  The one-page comic shares its space with a five-panel strip at the bottom of the page, entitled “Pupusi and Her Belly-Swelling Fetish.”

“The Janx and the Ingrate”:
First, we get two more four-panel comic strips about Pupusi's fetish.  Then, it's on to the one-page comic that shares the space.  In “The Janx and the Ingrate,” we learn that the cryptid featured on the cover of Blubber #5 is called “The Janx.”  This creature has a foot fetish, and it has a surprise for the ingrate who does not appreciate the pleasure it gives.

“John Dick”:
This inside the back cover, one-page comic features a guy named “John Dick.”  John appears in the inside front cover story, “Atom Baby Crunchers” and also in “Maximiliano's Huge Fuckin' Choad,” but those are only cameos.

He is the star of the show in “John Dick,” in which he shows off his erect penis, which is somewhere between two to three-feet long.  “John Dick” asks the question: what do you do when your erect cock is so long and large that no human orifice can service it?  Is the answer to suck it yourself?

Right now, Gilbert Hernandez seems to be the only cartoonist doing true modern Underground Comics.  Blubber recalls the classic erotic/porn comics of R. Crumb, but Hernandez's work is more purely surreal.  I treasure Blubber #5, as I do every issue, because I see it as a gift from the rebellious spirit of a master of alternative comics.

I READS YOU RECOMMENDS:  Fans of Gilbert Hernandez must have Blubber.