Comics Review: "VENGEANCE OF VAMPIRELLA #25" Brings the Series to a Rousing Conclusion 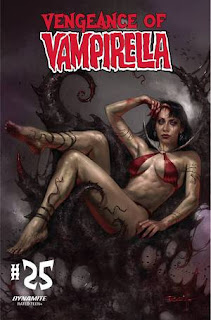 One of Dynamite's Vampirella comic book series is Vengeance of Vampirella, which was also the title of a Harris Comics series.  Vengeance of Vampirella Volume 2 is written by Thomas Sniegoski; drawn by Michael Sta. Maria and Kewber Baal; colored by Omi Remalante, Jr.; and lettered by Troy Peteri.  The series focuses on a reborn Vampirella, fighting the forces of Mistress Nyx and the Lords of Chaos to save humanity and then, trying to live in a new world after the war has been won.

Vengeance of Vampirella Volume 2 #25 opens in Sepulchre City.  Vampirella's old enemies, “The Danse Macabre,” and its leader, Mr. Sabastian, make their final move.  Once upon a time, a resurrection spell was used to revive Vampirella, but that spell was originally meant for Sabastian.  Now, he wants it and has begun the process of extracting the resurrection energies from Vampirella.

Meanwhile, Jeannine, Vampirella's traveling companion, has been waiting for the sign that will mean she must make her move to help, but in order to do so, she will have to undergo a big change.  When the smoke clears, justice in the monster city will have a new name.  Will that name be Vampirella's.

THE LOWDOWN:  Dynamite Entertainment's marketing department recently began providing me with PDF review copies of some of their titles.  One of them is Vengeance of Vampirella Volume 2 #25.  It is the sixth issue of this series that I have read, and one of a growing number of Vampirella comic books that I have recently read.

Issue #25 is the final issue of the Vengeance of Vampirella Volume 2.  Writer Thomas Sniegoski closes out what has been an interesting run of issues the second half of this year.  Readers will be satisfied, as I am.  I have found the last six issues of this series to be among the most entertaining Vampirella issues that I have read in 2021.

Artist Kewber Baal came in last issue and finishes the series with some strong art and storytelling, with Omi Remalante, Jr.'s rich colors once again bringing a nice dark mood to the story.  Troy Peteri's lettering closes out this battle royale so that it can come across as a battle for the ages.

Apparently, Vengeance of Vampirella Volume 2 is ending to give way to a new Vampirella series, Vampirella Strikes!  I'm looking forward to it, and hopefully trade paperback collections will give readers a chance to revisit this series or new readers to experience it.