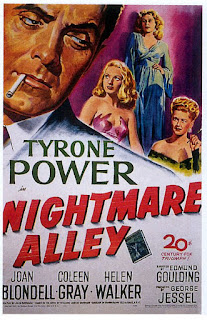 Nightmare Alley is a 1947 American film noir drama directed by Edmund Goulding and starring Tyrone Power.  The film is an adaptation of the 1946 novel, Nightmare Alley, which was written by William Lindsay Gresham.  Nightmare Alley the film focuses on the rise and fall of a con man.

Nightmare Alley opens at a seedy traveling carnival and introduces the carnival's barker, Stanton “Stan” Carlisle (Tyrone Power), who is fascinated by everything at this place where he works.  Stan works with Zeena Krumbein (Joan Blondell), who performs as the mentalist, “Mademoiselle Zeena,” with her alcoholic husband, Peter “Pete” Krumbein (Ian Keith).  At one time, Zeena and Pete were a top-billed vaudeville act, and the two of them used an ingenious code to make it appear that she had extraordinary mental powers.  However, the duo has been reduced to working in carnivals, and Pete is a severe alcoholic.

When Stan learns that many people want to buy the code that Zeena and Pete once used, he wants it, too.  Zeena rebuffs Stan's attempts to get the code, but one night, while the carnival is in Burly, Texas, a terrible accident provides Stan with the opportunity to get the code.  With Molly (Collen Gray), a young carnival worker by his side, Stan becomes “The Great Stanton” the acclaimed mentalist.  But can this “uncommonly shrewd young trickster” (as one character refers to him) escape his troubled past, his guilt, and his fate?

I became interested in Nightmare Alley when I heard that Oscar-winning director Guillermo del Toro was going to remake it.  Actually, del Toro's film is less a remake and more a new adaptation of William Lindsay Gresham's novel.

Regarding the 1947 film:  apparently, Tyrone Power (1914-1958) wanted to play the role of Stanton Carlisle in order to expand his career beyond playing romantic leads and swashbucklers.  These were the roles that made him a matinee idol in Hollywood in the mid-1930s and early 1940s, his star being born with 1936's Lloyd's of London.  Stan is a good character to play.  He is complicated and complex because he is not one thing.  Stan can be ruthless and cruel and kind and considerate from one moment to another.  He is highly skilled at the things in which he endeavors, but his greatest skill is his ability to con even the most skeptical people.

Stan is the kind of character who is perfect for a story of the “rise and fall” of an ambitious person, and this film is about the rise and fall of Stanton Carlisle, except that isn't a plot.  The film follows Stan around, but the movie does not have a hook that really captures the audience's interest.  It is not until an hour into the film when the narrative finally engages a conflict, which involves a psychiatrist, Lilith Ritter (Helen Walker), who is also Nightmare Alley's “femme fatale.”  That's when we get the hook in the form of con job that is brilliant if it is successful and disastrous if even one thing goes wrong.

Upon its initial release, Nightmare Alley proved to be scandalous, in part because of the way religion plays a part in Stan's cons, and it was not a box office success.  Over time, the film has apparently gained a following and is considered a classic of the film noir genre.  Whether or not it is classic film noir is up to the viewer, although I don't consider it a classic.  Nightmare Alley is not a great film, but there are times when it is really good.

However, I cannot help but find myself impressed by Tyrone Power's layered performance.  Power really does make Stanton Carlisle feel like a genuine person, and he conveys Stan's dark side in a way that makes me pity him rather than dislike him.  I am certain that over the years, other viewers felt the same way.  I think that film noir fans will want to see this, and if there are any Tyrone Power fans still out there, they will want to see Nightmare Alley.