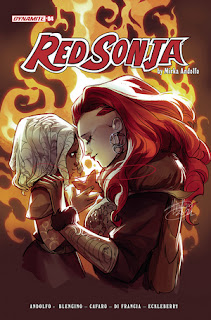 Red Sonja remained a fixture in comic books from then until about 1986.  There have been several ongoing Red Sonja comic book series, and the latest, Red Sonja Volume 6, is under the guidance of popular Italian comic book creator, Mirka Andolfo.  It is written by Andolfo and Luca Blengino; drawn by Giuseppe Cafaro; colored by Chiara Di Francia; and lettered by Jeff Eckleberry.  In this new series, Red Sonja accepts the bounty to bring a girl named “Sitha” to a broker who will send her to her true home.  The girl, however, becomes attached to Sonja and calls her mother.

Red Sonja Volume 6 #4 (“Vengeance for Two!”) opens on the border of Aquilonia and Nemedia.  There, Red Sonja and her companions, Samosh the warrior and Setubia the old sorcerer, continue their search for Sitha.  Sonja had been hired to rescue the girl and to bring her to the place where her new life would begin.  The girl, however, has plans of her own.  Sitha seeks revenge against “Three-Eyed” Shezem, the warlord and marauder who destroyed her village and its people.

In the mountains between Britunia and Hyperborea is the edifice known as the “Mad King's Fortress.”  There, Sonja will discover Sitha's fate and the power within her, and the She-Devil with a Sword will also learn why Lord Shezem is called “Three-Eyed.”

THE LOWDOWN:   Dynamite Entertainment's marketing department recently began providing me with PDF review copies of some of their titles.  One of them is Red Sonja Volume 6 #4, which is the latest of several Dynamite Entertainment Red Sonja comic books that I have read.  This is also only the sixth issue of a Mirka Andolfo comic book that I have read.

Andolfo and Luca Blengino continue to offer an epic story of sword and sorcery, and they have thrown Sonja into a situation that finds her caught between opposing forces that could destroy her.  The result of this can be simply stated, as always.  Fans of sorcery and sorcery comic books will find this Red Sonja comic book series a blast to read.

I know I want to keep reading.

The text is copyright © 2021 Leroy Douresseaux. All Rights Reserved. Contact this blog or site for syndication rights and fees.

Posted by Leroy Douresseaux at 12:29 PM