Comics Review: "SONJAVERSAL #10" Brings the Series to a Close 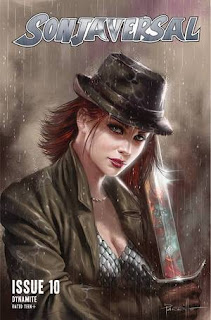 Red Sonja remained a fixture in comic books from then until about 1986.  In 2005, Dynamite Entertainment began publishing comic books featuring differing versions of the character.  One of those is a spin-off title, Sonjaversal, which sees Red Sonja battle parallel versions of herself from parallel universes.  Sonjaversal is currently written by Christopher Hastings; drawn by Pasquale Qualano; colored by Kike J. Diaz; and lettered by Hassan Otsmane-Elhaou.

Sonjaversal #10 opens in the domain of Hell Sonja.  That's where Blue Sonja, Purple Sonja, Yellow Sonja, and Sonja Noir find themselves, and their own worlds are beginning to collapse on themselves.  In order to save themselves, the Sonjas must learn a humongous secret … an unpleasant secret … many secrets.  What is Hell Sonja's grand design?  And what is the secret of everything?

THE LOWDOWN:   Dynamite Entertainment's marketing department recently began providing me with PDF review copies of some of their titles.  One of them is Sonjaversal #10, which is the fifth issue of the title that I have read.

Posted by Leroy Douresseaux at 4:41 AM