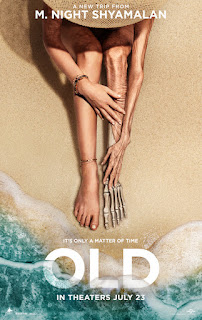 Old is a 2021 horror-thriller and fantasy film from director, M. Night Shyamalan.  The film is based on the 2010 French-language, Swiss graphic novel, Château de sable (2010) by Pierre Oscar Levy and Frederik Peeters, which was published in English as “Sandcastle” in 2011.  Old the movie focuses on a group of people trapped on a secluded beach where they age rapidly, reducing their entire lives into a single day.

Old introduces husband, Guy Cappa (Gael Garcia Bernal), and his wife, Prisca Cappa (Vicky Krieps).  They are going through a difficult time and decide to take their two children, 11-year-old daughter, Maddox (Alexa Swinton), and six-year-old son, Trent (Nolan River), on a family vacation to a tropical resort.  On their second morning at the resort, the Cappas get an offer from the resort's manager for a trip to a secluded beach.

Although the Cappas initially believe that they will have the beach to themselves, they soon learn they will not.  They meet a surgeon, Charles (Rufus Sewell); his wife, Chrystal (Abbey Lee); their six-year-old daughter, Kara (Kylie Begley); and Charles's elderly mother, Agnes (Kathleen Chalfant).  The late arrivals are the close-knit couple, Jarin Carmichael (Ken Leung) and his, wife Patricia Carmichael (Nikki Amuka-Bird).  Trouble starts when they meet someone who was on the beach before them, the recording artist and rapper, Mid-Sized Sedan (Aaron Pierre), and then, discover the corpse of his female companion.  Accusations fly, but no one is really paying attention to the fact that the three children are changing … rapidly.

The film's of writer-director M. Night Shyamalan can be both sublime, such as his Oscar-nominated breakthrough, The Sixth Sense (1999), or ridiculous like 2004's eye-rolling The Village.  Sometimes, his films can be both, to varying degrees, such as 2000's Unbreakable.  Or his films can be surprisingly inventive and mostly entertaining, such as 2013's After Earth, 2016's Split, and now Old.

People once called Shyamalan the next Steven Spielberg, although his films seem closer to Alfred Hitchcock's.  At the heart of most Shyamalan films is a mystery, and that mystery holds the audience in suspense.  The problem can be that when the mystery is solved in one of his films, sometimes the suspense turns to befuddlement, but that doesn't really happen with Old.

After the first twenty minutes or so of introduction, Old offers about forty minutes of the best mystery and suspense that audiences have gotten in the last two years or so of American films.  Shyamalan builds this killer thriller by depicting his characters' varied reactions to their crazy and increasingly unbelievable situation.  Watching some of them revert to their old melodramas, others fall into to their mental challenges, and some approach their situation with a sense of curiosity and wonder can be invigorating.  Through these characters, Shyamalan offers so many intriguing points of view.

The film's last forty minutes is a mixture of science fiction and horror that is captivating, even when it seems a bit over-the-top.  At this point, Shyamalan turns to the Cappas' domestic drama in a way that bounces between being poignant or edgy or stock melodrama.  There is a happy ending, but it is best, in order to avoid spoilers, that I allow you to decide whether that happy ending is plausible or appropriate, dear readers.

I have never read the comic book, Sandcastle, that inspired Old, but from what I understand, the comic's narrative is a bit more ruthless with its characters.  Still, I found Old satisfying because of Shyamalan's seamless filmmaking and because of the way his uses the characters' aging to keep things hopping in the narrative.  I don't know if M. Night Shyamalan's Old will age well, but I do believe that it will always find an audience willing to be enraptured by its mystery and thrilled by its suspense … to one extent or another … like me.