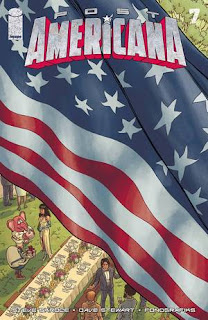 Post Americana is a seven-issue miniseries written and drawn by Steve Skroce and published by Image Comics.  Post Americana is set in a dystopian future and focuses on two rebels' attempts to save an area called the “Wasteland” from a rogue President of the United States.  Colorist Dave Stewart and letterer Fonografiks complete Post Americana's creative team.

Post Americana #7 opens in the Bubble.  Marcy Okamoto has launched her plan to destroy humanity and to replace humans, using seven perfect “New People” embryos as the foundation.  At the same time, her droids are laying waste to the Bubble and killing its denizens.  So what is President of the United States Nathaniel Hawksworthe doing?  He and his mother are making their escape.

However, before anyone leaves, Carolyn has embraced her destiny and is ready to deliver some cold-bloodied justice.  Meanwhile, Eggbert Beauregard, one of the lost IP of Wonder Studios, is leading a revolt of the Bubble's enslaved.  So where are Mike and Mr. Floppibottoms, another lost IP?  It's Carolyn versus Marcy versus President Hawksworthe in a final showdown.

THE LOWDOWN:  Every time, I write a review of one of his comic books, I remind you, dear readers, that I am a huge fan of writer-artist Steve Skroce, going back over two decades.  I have also praised every issue of Post Americana.

Well, Post Americana #7 brings the series to an end, five months after the arrival of issue #6.  It was worth the wait, as this seventh issue is one of the series' best.  And there's a happy ending – happier than the end of Skroce's excellent comic book miniseries, We Stand on Guard.  Steve Skroce's lovely art; Dave Stewart's gorgeous coloring, and Fonografiks' standout lettering make for an excellent graphics and graphical storytelling package.

I highly recommend this entire series, which will be available in a Post Americana trade paperback this month (December 2021).  Now, I'll await Skroce's next comic book miniseries masterpiece.