Review: "SPIDER-MAN: No Way Home" Brings it on Home 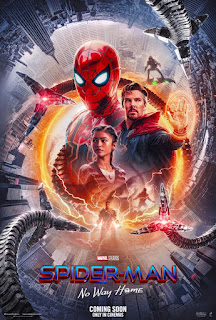 Spider-Man: No Way Home is a 2021 superhero film and drama from director Jon Watts.  It is the eighth film in Columbia Picture's Spider-Man film franchise, and it is the third entry in a film trilogy that began with 2017's Spider-Man: Homecoming.  No Way Home is also a co-production between Columbia and Marvel Studios, making it the 27th film in the Marvel Cinematic Universe.  In No Way Home, Peter Parker turns to fellow Avenger, Doctor Strange, for help in making the world forget that he is Spider-Man, with disastrous results.

Spider-Man: No Way Home opens one week after the events depicted in Spider-Man: Far From Home (2019).  Peter Parker's (Tom Holland) identity as Spider-Man has been revealed to the world, and Spider-Man has been framed for the murder of Mysterio/Quentin Beck, whom some in the public see as a hero and a warrior.  Although his Aunt May (Marisa Tomei) takes the news better than expected, Peter is stilled concerned with how the news is affecting the lives of his girlfriend, Michelle “MJ” Jones-Watson (Zendaya), and his best friend, Ned Leeds (Jacob Batalon).

Peter turns to Dr. Stephen Strange (Benedict Cumberbatch) for help.  He asks Doctor Strange to cast a mystic spell that will make the world forget that he is Spider-Man, but Strange's mentor and friend, Wong (Benedict Wong), warns him about casting such a spell.  Strange casts the spell anyway, but Peter damages it by constantly asking for changes in who can remember him, which destabilizes the magic.  That in turn destabilizes the multiverse, causing cracks in reality.  Yes, the multiverse is real, and now, people from other universes who know that Peter is Spider-Man start showing up in Peter's world.  And that includes some dangerous villains who have previously engaged Spider-Man in death matches.  Peter does not know any of them, but he is determined to save them from their fates.  Is our young hero willing to pay the costs and make the sacrifices that it will take to make everything right in this world and in the wider multiverse?

Sony Pictures is determined to keep social media and media in general from spoiling the many surprises contained in its film, Spider-Man: No Way Home.  The film does a number of things very well, but it does two things particularly well.  Talking about the first could reveal spoilers, so what I will say is that this film gives us the appearances by certain characters and actors that many of us have wanted since we first heard the rumors that this film would deal with the multiverse.  Most of the character appearances are not cameos, and they contribute significantly to No Way Home.  The audience which with I saw No Way Home this past evening cheered with gusto for each special appearance.  They cheered as much as I ever heard an audience cheer during a superhero film.

Spider-Man: No Way Home is a joint production between Sony Pictures and Walt Disney Pictures' Marvel Studios.  One of the many things that Marvel's films do well is character development and drama.  No Way Home is the first film in the Sony/Marvel Spider-Man trilogy in which Peter Parker is confronted with the high costs of being Spider-Man.  Until this film, he has been relatively unscathed., but now, he learns that the decisions he makes can have ruinous consequences.  He suffers humiliations, setbacks, and heartbreaking loss.  He learns that with great power there must come great responsibility, and he learns that true heroes often make tremendous personal sacrifices for the benefit of others.  In No Way Home, Spider-Man becomes a man.

Don't get me wrong.  Spider-Man: No Way Home is certainly a true crowd-pleaser, and it is also one of the best films that I have seen this year.  As Peter Parker/Spider-Man, Tom Holland gives a wonderful performance in a film that requires him to express a wide range of emotions, sometimes from one extreme to another.  Holland, in layers, with textures, and with art, shows us the evolution of Spider-Man and especially of Peter Parker.  Spider-Man: No Way Home is one for the ages, and it is a great way to end one Spider-Man trilogy … so that the next one can come home.

Posted by Leroy Douresseaux at 1:15 PM