Review: In "TARZAN, the Ape Man," Bo Derek Could Drive a Man Ape 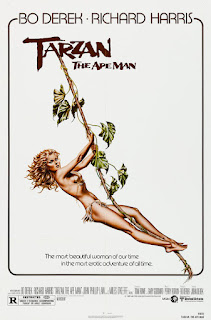 [I am working my way through the films that I first saw in a movie theater for which I have not previously written a movie review.  The first time I saw a movie in an in-door theater (as opposed to a drive-in cinema) was in 1980 – likely The Empire Strikes Back.  However, I am starting this process in the year 1981, and it turns out that there are only two movies left from that year that I saw in a theater for I which I have never written a formal review.  Tarzan, the Ape Man is one of them.]

Tarzan, the Ape Man is a 1981 fantasy-adventure film and Tarzan movie directed by John Derek.  The film is loosely based on the 1912 novel, Tarzan of the Apes, by Edgar Rice Burroughs.  Tarzan, the Ape Man is told from the point of view of Jane Parker, who meets Tarzan while on an African expedition with her estranged father.

In 1910, Jane Parker (Bo Derek) arrives in West Africa.  She is looking for passage deep into the jungle where she hopes to find her long estranged father, James Parker (Richard Harris), whom she has never met.  When she does arrive at “Parker's camp,” she discovers that James Parker is the typical “great white hunter,” loud and boastful, full of songs and stories.

James is searching for the legendary “elephants' graveyard,” which is also known as the “escarpment.”  James reluctantly allows Jane to accompany him and his photographer, Harry Holt (John Phillip Law), on the expedition.  During the journey they also hear the call of Tarzan, the mythical “white ape.”  James declares that he will kill this Tarzan and have him mounted as a trophy, but James does not realize that he is also being hunted.  Meanwhile, Jane finds herself captured by Tarzan (Miles O'Keefe), but she is as fascinated by him as she fears him.

Film critics generally panned Tarzan, the Ape Man upon its initial release to movie theaters.  Some called it “one of the worst movies ever made” or “the worst movie ever.”  It is certainly not highly considered among the decades of feature films based on the Tarzan character.  However, the late Pulitzer Prize-winning film critic, Roger Ebert, was correct when he wrote that Tarzan, the Ape Man has a certain charm or disarming charm, although it is ridiculous in many ways.

I saw it as a 15-year-old in a local theater four decades ago, and I liked it then, although I was not crazy about it.  The reason I saw the film was because of Bo Derek, and I wanted to see her have sex on screen.  That did not happen, but there was a lot of sexual playfulness, some of which I can say, as an adult, has a wrongness to it.  I did not think that at the time; I just wanted as much Bo Derek as I could get, especially nude Bo Derek.

Watching it 40 years later and for the first time since then, I can say that I appreciate Bo Derek even more.  When this film was made and screened, she was in her mid-20, and Derek in her 20s was at the height of her powers, in terms of her looks, her body, and her sexual appeal.  Then and now, some women (and men) would sell their souls to have a her lithe, sexy body and those perfectly plump breasts.  I don't think I lusted for her as a teen as much as I did this time around.  I thought I would have a heart attack when, as Jane Parker, she emerged from the water in a white gown turned see-through when it got wet.  As Booger says in Revenge of the Nerds:  We got bush!

Bo Derek's husband, the late John Derek, made four films featuring his wife:  Fantasies and Tarzan, the Ape Man, both released in 1981; Bolero, released in 1984; and Ghosts Can't Do It, released in 1989.  Other than this Tarzan film, the only other one I saw was Bolero, which was, quite frankly, terrible.

Tarzan, the Ape Man is certainly a Bo Derek film, but a few other actors manage to stand out.  Richard Harris, in some ways, saves the film by giving a mad, over-the-top performance in order to create Jane's father, James Parker.  John Phillip Law as the photographer Harry Holt is good; Law certainly makes obvious Holt's naked lust for Jane Parker.

Miles O'Keefe was not the first choice to play Tarzan in this film, but he was intended to be the stunt double for the actor that would take the role.  Well, the actor who was to play Tarzan was fired or quit the film, and I don't know his identity.  O'Keefe stepped in to play Tarzan, and at that time, his body was the perfect male equivalent of Bo Derek's.  Lean, sinewy, muscular, and possessing perfectly sculpted abs, O'Keefe was an eye-appealing Tarzan, even if he was a really odd one.

If I remember correctly, the estate of Tarzan's creator, Edgar Rice Burroughs, was not pleased with this film, which made significant changes to the source material.  For instance, Jane Parker is really Jane Porter in the books, and her father is the professor, Archimedes Q. Porter, and not James Parker, the great white hunter.  Still, I hope that Tarzan, the Ape Man is not completely forgotten.  Future generations of men and teen boys should be able to partake of the opportunity that this film gives them to appreciate what, for a time, was one of American cinema's most beautiful women.  I plan to partake of that opportunity, again...