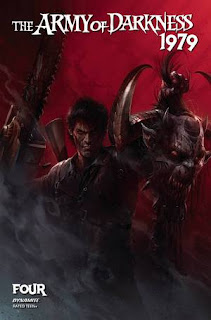 As The Army of Darkness 1979 Volume 1 #4 opens, Ash talks about the Necronomicon and his trials and tribulations with the book … to himself, but at least the members of “The Half Deads” street gang are listening.  Meanwhile, Lilith is trying to convince Bishop, leader of “The Warlocks,” that she has left The Half Deads and wants in on The Warlocks.  Bishop doesn't trust her.  Luckily (for him, not her), he now possesses the Necronomicon, which can judge if Lilith is being honest...

While waiting for Lilith, Ash and the gang happen upon the legendary club, “Studio 54.”  Suddenly, Ash has a case of “Saturday Night Fever,” but will his antics cause a “Disco Inferno?”

With each issue of the series, writer Rodney Barnes digs deeper into late 1970s culture and pop culture and spins it into comedy gold.  Barnes is creating a comic book that is true to the spirit of the Evil Dead and Army of Darkness films.  It's not the scares that made this franchise; it's the snark and the fun.

The trademark Army of Darkness comic horror dialogue, ghoulish wit, and mockery lives well in Army of Darkness 1979 Volume 1.  If this is your thing, hop in a comic book portal and join the fun.

Posted by Leroy Douresseaux at 10:36 AM