Comics Review: "SHEENA Queen of the Jungle #2" is a Great Second Issue 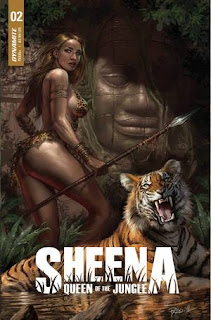 As Sheena: Queen of the Jungle, Volume 2 #2 opens, Sheena is in “MegaPark” trying to discover why the first travelers into the bio-dome have disappeared.  Sheena is also trying to find her animal friends who are also trapped in the park.

Sheena may have uncovered a small part of the mystery.  A massive, cheetah-like beast seems to be doing a lot of killing – and it is more than a match for Sheena!

THE LOWDOWN:  Dynamite Entertainment's marketing department recently began providing me with PDF review copies of some of their titles.  One of them is Sheena Queen of the Jungle Volume 2 #2, which is the second Dynamite Sheena comic book that I have read.

Stephen Mooney, Jethro Morales, Dinei Ribero; and Taylor Esposito, the creative team behind the recent comic book miniseries, Bettie Page and the Curse of the Banshee, slid right on into Sheena: Queen of the Jungle Volume 2.  In the fantastic first issue of this series, they delivered deceit, trickery, and murder mystery most foul.  Mooney's script for the second issue grabs readers' imaginations as much as the one for the first issue.

As for the art team, I can say what I said in my review of the first issue.  Stephen Mooney can draw good girl art with the best of them, but his graphical storytelling is as strong as the illustrations are pretty.  Dinei Ribero delivers pretty colors, and Taylor Esposito delivers excellent lettering.  This is a creative team worthy of your cash.

The first issue surprised me, but now, I expect excellence from this Sheena comic book.  I don't think that I will disappoint.