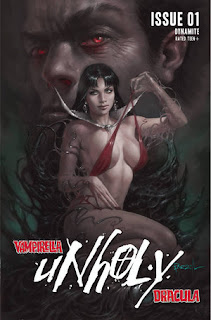 “A Fistful of Dirt”

In 2010, Dynamite Entertainment obtained the character and has been publishing new Vampirella material since then.  Dynamite's latest Vampirella comic book series is a follow-up to the recently concluded Vampirella Volume 5 and is entitled Vampirella Dracula Unholy.  The new series is written by Christopher Priest; drawn by Donny Hadiwidjaja; colored by Mohan; and lettered by Willie Schubert.

Vampirella Dracula Unholy Volume 1 #1 (“A Fistful of Dirt”) opens at Castle Bran, Braşov, Romania.  Or does it open at the Howard Johnsons Inn in Sibiu, Romania?  Vampirella has married FBI Agent Mathias “Matt” Ecsed in a “blood rite,” a joining of souls to keep Matt from transforming into Count Dracula/Vlad Drachul.

So the honeymoon begins!  The adventure of several lifetimes begins as Vampirella and Matt journey to Castle Dracula in Transylvania.  It's all part of an attempt to cheat fate by preventing both a high-tech virus and an ancient curse from using Matt's body to resurrect the deadliest threat the world has ever known.  But maybe the castle has other plans.  Meanwhile secrets and mysteries grow around Matt, who may not be nearly as innocent or as straight... as he appears to be.

THE LOWDOWN:  Dynamite Entertainment's marketing department recently began providing me with PDF review copies of some of their titles.  One of them is Vampirella Dracula Unholy.  It is one of many Vampirella comic books that have engaged my imagination these last few months.

Writer Christopher Priest, who wrote the previous Vampirella series, offers a tantalizing first issue.  He does this by starting to deliver on some of the plot threads that he dangled in front of readers over the last several issues of Vampirella Volume 5

I'm not that crazy about the new artist, Donny Hadiwidjaja, but his storytelling is good enough.  In fact, this first issue of Vampirella Dracula Unholy is good enough to make me come back for the second issue.