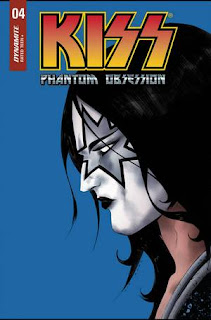 As Kiss: Phantom Obsession #4 opens, Paul, Gene, Ace, Peter, and Lyra Tzen, one of Cho's employees, are on the run from samurai androids known as “The Kingdom of Woes.”  While they find a new place to hide, Lyra tells the band the out-of-this-world origin story behind many of Darius Cho's scientific and technological innovations.

Then, they discover the fate of some of Cho's former employees.  Plus, Lyra's got a big secret.

THE LOWDOWN:  Dynamite Entertainment's marketing department recently began providing me with PDF review copies of some of their titles.  One of them is Kiss: Phantom Obsession #4, which is only the fourth Kiss comic book that I have ever read.

In Phantom Obsession, writer Ian Edginton continues to offer a breezy adventure that is part Kiss comic book and part superhero comic book.  Phantom Obsession is the best issue yet, and it was apparently going to be the final issue.  I assure you, however, that the cliffhanger at the end of this issue suggests a great fifth issue.  I hope issue #5 can deliver...