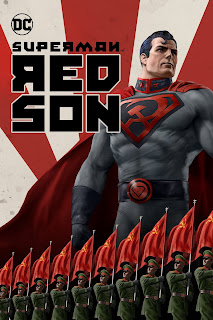 Superman: Red Son is a 2020 straight-to-video animated superhero film from Warner Bros. Animation and director Sam Liu.  It is the thirty-seventh film in the DC Universe Animated Original Movies series.  The film is based on the 2003, four-issue, comic book miniseries, Superman: Red Son, written by Mark Millar and drawn by Dave Johnson and Kilian Plunkett.

The traditional origin of Superman is as follows.  A rocket ship from the doomed planet, Krypton, carries baby Kal-El to Earth.  It lands in the United States, specifically in a field near the town of Smallville, Kansas.  Jonathan and Martha Kent find the rocket and Kal-El inside.  They adopt him and name him “Clark Kent,” and Clark grows up to be Superman.  The premise of Superman: Red Son is that the rocket ship landed in the Union of Soviet Socialist Republics (USSR) a.k.a. the Soviet Union.

Superman: Red Son opens in the Soviet Union during the year 1946.  There, we meet a young boy who is being chased by a gang of bullies.  The boy's friend, a young girl named Svetlana, defends him by chasing the bullies away.  The boy reveals to Svetlana that he was not scared of the boys, but that he was instead scared for their safety.  The boy then reveals to Svetlana his superhuman strength and his ability to fly.

In the year 1955, the Soviet Union releases a propaganda film of an alien superhuman under the command of the nation's premiere, Joseph Stalin.  The American media dubs the alien, the “Soviet Superman” (Jason Isaacs).  In the United States, President Dwight D. Eisenhower (Jim Meskimen) tasks genius scientist, industrialist, and inventor, Lex Luthor (Diedrich Bader), to develop countermeasures against this Soviet Superman.

After the Soviet Superman prevents a satellite from crashing into the American city of Metropolis, Luthor's wife, Lois Lane Luthor (Amy Acker), secures an interview with him.  Lois uses the interview to reveal to him a top secret document that indicates the horrors Premiere Stalin perpetuates against some citizens of the Soviet Union behind Superman's back.  This leads to changes in the nature of Superman's relationship with the Soviet Union and also with the world at large.  Now, a Cold War between Superman and the United States begins, with Lex guiding the U.S. side.  Can the world survive Superman's goals and Lex Luthor's machinations?

The novelty of Superman: Red Son is that it offers alternate-reality versions of not only Superman, Lex Luthor, and Lois Lane, but also of Batman, the Green Lantern Corps, and Wonder Woman (Vanessa Marshall).  However, the novelty soon wears off, and Superman: Red Son's gimmick grow old and cold rather quickly.

Luckily, Superman, Lex Luthor, Lois Lane, and Wonder Woman are so well-written in terms of personality and character drama that I found myself fascinated by the inter-character relationships involving these four.  Beyond that, I was initially fascinated by the film, but felt less so after the first half hour.

I have never read Mark Millar's original comic book, Superman: Red Son, but I have been planning to for ages, although I keep putting it off.  I am a huge fan of the majority of Millar's comic book output.  Superman: Red Son has its moments, but after seeing it, now, I really need to read the comic book.