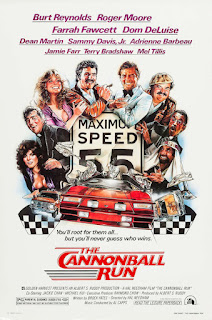 [I am working my way through the films that I first saw in a movie theater for which I have not previously written a movie review.  The first time I saw a movie in an in-door theater (as opposed to a drive-in cinema) was in 1980 – likely The Empire Strikes Back.  However, I am starting this process in the year 1981, and it turns out that there are only two movies left from that year that I saw in a theater for I which I have never written a formal review.  The Cannonball Run is one of them.]

The Cannonball Run is a 1981 action-comedy and car-racing film from director Hal Needham.  The film was produced by the Hong Kong film company, Golden Harvest, and distributed by 20th Century Fox.  The movie's plot was based on the 1979 running of an actual cross-country, outlaw road race, the “Cannonball Baker Sea-to-Shining Sea Memorial Trophy Dash,” which was also known as the “Cannonball Run.”

The film features an all-star ensemble cast, led by Burt Reynolds and featuring Dom DeLuise, Roger Moore, Farrah Fawcett, Dean Martin, and Sammy Davis, Jr., to name a few.  It was also the second Hollywood film appearance for Hong Kong martial arts legend and international movie star, Jackie Chan.  The Cannonball Run movie focuses on an illegal cross-country race and its oddball contenders who will use every dirty-trick-in-the-book to evade the law and to screw over their opponents.

The Cannonball Run opens in Connecticut were several teams of racers have gathered for the latest running of the illegal, cross-country road race, the “Cannonball Run.”  The goal of the racers, who are called “Cannonballers,” is to reach Portofino Inn in Redondo Beach, California.  Some of them hope to break the Cannonball's speed race record of 32 hours and 51 minutes.

The race teams that have gathered in Connecticut are an odd lot.  The most eccentric is the team of JJ McClure (Burt Reynolds), a famous racing driver and team owner, and Victor Prinzi (Dom DeLuise), his chief mechanic and co-driver.  There racing vehicle is a “Transcon Medi-Vac” ambulance outfitted with a NASCAR engine.  In order to convince any law enforcement officers that might stop them that they are a real ambulance and medical team, McClure and Prinzi draft a wacky physician, Doctor Nikolas Van Helsing (Jack Elam), into their plans.  For a patient, they kidnap a beautiful young woman, a tree-loving photographer named Pamela Glover (Farrah Fawcett).

Their competitors are right behind them and are almost as weird.  Scotch-swilling Jamie Blake (Dean Martin), an F1 racing icon, and his gambling-obsessed teammate, Morris Fenderbaum (Sammy Davis Jr.), dress as Catholic priests, and drive a red Ferrari.  Jill (Tara Buckman) and Marcie (Adrienne Barbeau) are two attractive women who use their good looks and impressive cleavage against traffic officers while driving a black Lamborghini.  Two Asian racers (Jackie Chan and Michael Hui) race in a high-tech, computer-laden Subaru hatchback.  Seymour Goldfarb, Jr. (Roger Moore), the heir to the “Goldfarb Girdles fortune,” identifies himself as the actor Roger Moore, and he even drives a silver Aston Martin DB5.

Chasing after these teams and determined to stop the race because of its effects on the environment is Mr. Arthur J. Foyt (George Furth), an agent of the federal government's “Safety Enforcement Unit.”  But can Mr. Foyt really stop all the racers, or will their dirty tricks stop each other?

I know why 15-year-old Leroy loved The Cannonball Run when he saw it in a theater in 1981 (the Vista Village Twin Cinema).  He liked the fast cars, the cool-looking cars, the pretty White women with big boobs, and he was a fan of the actors and celebrities who appeared in the film, such as Burt Reynolds, Dom DeLuise, Farrah Fawcett, Mel Tillis, and Terry Bradshaw, to name a few.  I was and still am a huge fan of the NFL team, the Pittsburgh Steelers, and legendary Steelers quarterback, Terry Bradshaw, was and still is my favorite NFL player, even though he is now a fat, old White man who supports Donald Trump.

But why did AARP Leroy, who recently watched The Cannonball Run again for the first time in 40 years (via Netflix's DVD.com), still find himself loving the movie?  Maybe, it is because I like speedy, high-end, foreign sports cars.  Maybe, it's because I still like amble breasts on White women.  Maybe, it is because I still like many members of the film's cast, and I certainly appreciate Adrienne Barbeau, Sammy Davis, Jr., and Dean Martin more than I did back then.  And maybe, it is because now I appreciate the way actor Alfie Wise and former NFL defensive lineman, Joe Klecko, who both appeared in The Cannonball Run, once looked in tight jeans.

I also noticed that some of the larger profile stars in this film are best known for what they did in the 1970s.  Some continued to be star actors into the 1980s and beyond, such as Burt Reynolds.  Others, like Terry Bradshaw, found new careers.  Bradshaw has acted and appeared in numerous films and television shows, and he has had a four-decade career in sports broadcast that has earned him three Sports Emmy Awards, and he is still do that as of this writing.

Maybe, part of my enjoyment of this film is nostalgia.  I am a fan of at least ten performers who appeared in The Cannonball Run and who are now deceased, including Burt Reynolds and Dom DeLuise.

That aside, the film is genuinely funny, at least I think so.  It has a simple plot – win the race, trick the police, and lie-cheat-steal your opponents.  The setting is also simple, the highway and byways of the United States.  Sadly, because the film has a short-running time, it can only provide a cursory glance at the many unique places across the USA through which the Cannonballers have to travel.  Honestly, I think this concept would make for a good television series, at least a miniseries.

The characters are actually interesting.  Most of the actors are playing themselves or are playing character types, like Jack Elam's goony Dr. Van Helsing.  I'm pretty sure that Dean Martin and Sammy Davis, Jr. were each playing a character they played many times before this film, both on television and in film.  Farrah Fawcett's whispery-voiced Pamela Glover is a mostly pointless character, but Adrienne Barbeau and Tara Buckman make better use of their “sex appeal.”

In the case of Burt Reynolds and Dom DeLuise, their playing to type was and still is fine with me.  Reynolds smile and his wit shine through in The Cannonball Run, which is by no means one of his better performances.  Reynolds popularity lasted so long because he was a true movie star.  As for DeLuise, if you liked what he usually did, well, he gave all of himself here.  I have always found him likable, even when the material was not top notch, which it is not here.

I think what really sold The Cannonball Run, both to teenage me and to old me, is that everyone in this movie seems to be genuinely having fun.  Back in 1981, those good feelings crossed over to the audience; The Cannonball Run was one of the year's biggest box office hits.  In a way, those good feelings have crossed over through time to me, and I found myself really enjoying this movie all over again.

Posted by Leroy Douresseaux at 4:31 AM