Review: "TARZAN and the Lost City" is Entertaining in Spots 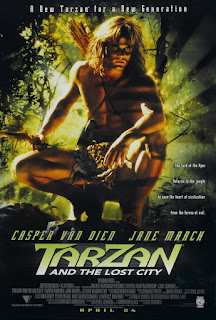 TRASH IN MY EYE No. 117 (of 2006) by Leroy Douresseaux
Tarzan and the Lost City (1998)
Running time:  84 minutes (1 hour, 24 minutes)
MPAA – PG for adventure violence
DIRECTOR:  Carl Schenkel
WRITERS:  Bayard Johnson and J. Anderson Black (based upon the stories by Edgar Rice Burroughs)
PRODUCERS:  Stanley S. Canter, Dieter Geissler, and Michael Lake
CINEMATAGRAPHER:  Paul Gilpin
EDITOR:  Harry Hitner
COMPOSER:  Christopher Franke
FANTASY/ACTION/ADVENTURE
Starring:  Casper Van Dien, Jane March, Steven Waddington, Winston Ntshona, Rapulana Seiphemo, and Ian Roberts
The subject of this movie review is Tarzan and the Lost City, a 1998 fantasy and adventure film from Village Roadshow Productions and Warner Bros. Pictures.  It was the first Tarzan movie shot entirely in Africa.  The film is loosely based on the Tarzan stories that were written by the character’s creator, Edgar Rice Burroughs.  In Tarzan and the Lost City, Tarzan returns to his African homeland to save it from destruction.
John Clayton, Lord Greystoke (Casper Van Dien) is about to marry his love, Jane Porter (Jane March), in London, when he learns through a kind of psychic connection with a lion that his old African homeland is in danger.  You see, Clayton is also Tarzan, Lord of the Apes, the famous jungle king who was orphaned on the Dark Continent (Africa) as an infant and raised by apes.
Tarzan puts off his wedding, much to Jane’s chagrin, and returns to Africa to stop the pillaging and animal poaching by the explorer, Nigel Ravens (Steve Waddington).  Raven has embarked on a quest to discover the lost city of Opar, said to by the birthplace of civilization.  While Tarzan begins his gorilla war against Waddington, Jane arrives in Africa and joins Tarzan in his bid to stop Waddington from finding Opar and looting it of its secrets and treasures.
Tarzan and the Lost City was the first Tarzan movie filmed entirely in Africa, and that gives the film a sense of realism, which isn’t necessarily a good thing.  Tarzan, who first appeared in the 1912 novel Tarzan of the Apes by Edgar Rice Burroughs, is a fantasy.  He’s larger than life, and he belonged to an era when people still romanticized the mythical great white hunter and the idea that a smart white man could, just on his superior intellect and physical superiority, conquer the mysterious and unexplored jungle worlds.
That said, this is a mildly entertaining flick, a few steps above a TV movie, and Christopher Franke’s score (which recalls strains of John Williams’ Raiders of the Lost Ark music) gives this film the feel of an epic adventure.  Casper Van Dien (Starship Troopers) is a credible Tarzan, and he almost, but not quite, copies the famous yell of the most famous film Tarzan, Johnny Weissmuller.
5 of 10
C+
Original:  Saturday, May 27, 2006
Update:  Saturday, August 02, 2014
The text is copyright © 2014 Leroy Douresseaux. All Rights Reserved. Contact this site for syndication rights and fees.
-----------------------
Posted by Leroy Douresseaux at 9:21 AM