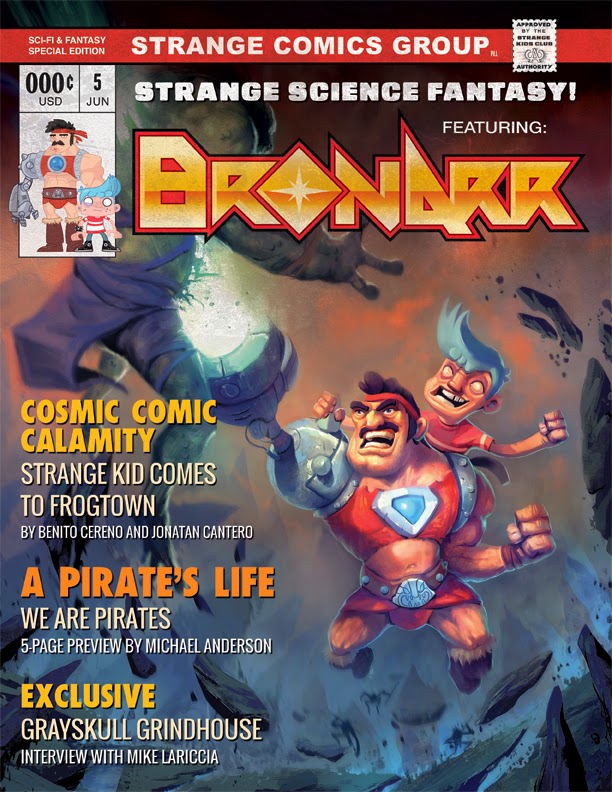 "A morbid romp through the media culture of the 1980’s." - COMIC BOOKED

AUSTIN, TX—Strange Kid and his pals, Lando and Orwell, are back for a comically cosmic misadventure that takes them across time, space and reality. This time, they’re blasting off to outer space where they meet their cartoon hero—Bronarr: Space Barbarian—and must team-up to save the universe from the evil Lord Gammax in a homage to Saturday morning shows like Thundarr and Masters of the Universe.

Based on characters created by Rondal Scott, Editor-in-Chief of Strange Kids Club, writer Benito Cereno (Tales From the Bully Pulpit, Hector Plasm) and illustrator Jonatan Cantero bring to life a brand new chapter in the saga of Strange Kid—a boy with an unusually big imagination and the ability to turn his wildest dreams into reality. His best buds are Lando, a smart but relatively normal kid, and Orwell, a giant purple chupacabra who only speaks Spanish.

"Vibrantly illustrated by many of today’s top talents... [with] artist interviews and gooey handfuls of dark humor." - RUE MORGUE MAGAZINE

"It's hard to work with these characters and not project my own quirky sense of humor onto them," said Rondal Scott. "My hope is that other people will connect with them as well, unleashing their own inner strange kid in the process. Luckily, I have great collaborators in Benito and Jonatan who understand what I'm trying to accomplish and have the amazing talent to translate it onto the page."

This issue introduces a new character, Bronarr: Space Barbarian, who fans of the "sword and planet" sci-fi subgenre will surely recognize as an homage to heroes like Thundarr, Blackstar, Conan and He-man. Some may even recognize references to Zed from the obscure 1974 film, Zardoz, starring Sean Connery. Without a doubt, Bronarr is a crazy mix of pop culture nostalgia, tongue-in-cheek parody and slam-bang action!


ABOUT STRANGE KIDS CLUB
Strange Kids Club (strangekidsclub.com)—an online digest of the strange, geeky and subversive—has been dumpster diving through the underbelly of pop culture nostalgia since 2009. Founded by Rondal Scott, Strange Kids Club began life as an art and culture blog but has since grown into a lifestyle brand focused on comics, toys, film, animation and fashion. While the website delivers a daily dose of satirical and totally biased opinions on entertainment news, the brand is also committed to producing original content which includes a comics magazine, collectible art prints, spoof stickers (Circle Jerks Stickers), digital trading cards (Closet Monsters) and parody apparel.

Posted by Leroy Douresseaux at 5:20 PM