Makoto Tateno to Appear at YaoiCon 2015 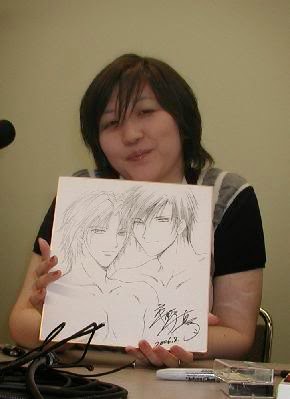 Makoto Tateno to be Guest of Honor at YaoiCon 2015

YaoiCon welcomes prolific manga-ka Makoto Tateno as Guest of Honor at this year’s YaoiCon, held September 18-21, 2015, in San Francisco, California. A fan favorite, Makoto Tateno has been known for creating both shōjo and boys’ love manga, many which have been licensed by Digital Manga, Inc. (DMI). Most recently, DMI has released A Murmur of the Heart. Among Western fans, Tateno’s Yellow series continues to be one of her most popular series. SuBLime has also licensed and released Makoto Tateno’s How’s Your Ex? digitally. She was also a guest at YaoiCon in 2009 and we are honored to have her return.

Martha Asahi has also been announced as an industry guest. She is known as a cosplayer and boys’ love manga-ka. Active in the cosplay community in Japan at conventions and photo shoots, Martha has released two manga, Nayameru Giin no Renai Kiyaku and Kimi o Nakasetai! both published by Okala Shuppan.

To view more information about our guests, please visit www.yaoicon.com/guests.php


About YAOICON:
YaoiCon is a one-of-a-kind 18+ convention for fans of all things yaoi. Founded in 2001, the convention is run by dedicated staff and volunteers each year and has been formally sponsored by Digital Manga, Inc., since 2012. YaoiCon delights attendees with unique programming and a fan-centric atmosphere, including (but not limited to!) hosting a celebrated Guest of Honor, presenting industry and fan panels related to the genre, and holding the iconic and not-to-be-missed Bishounen Auction, YaoiCon is the place for dedicated yaoi fans. Come join us this year at the lovely Hyatt Regency SFO in Burlingame, California, for three days of risqué and friendly fun!