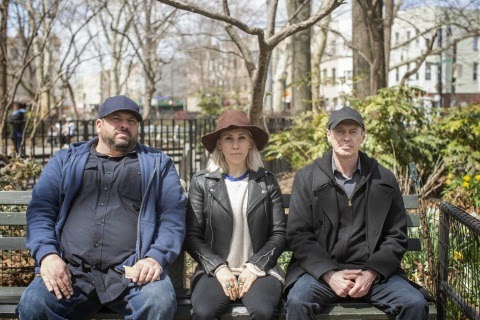 “Give me a seat on a park bench and I'm happy”

"Give me a seat on a park bench and I'm happy," said Steve Buscemi. “Give me a second season of Park Bench on AOL to talk about nothing and everything with old friends and new in an ever changing New York City - what could be better?”

Produced by Olive Productions and RadicalMedia, Park Bench, the original “talking show,” features Buscemi sitting down and speaking with celebrities and every day New Yorkers. Discussing everything from pop culture to current events, the show conveys Steve’s unique relationship with New York and its array of one-of-a-kind characters. The series takes its guests beyond the interviews, involving them in Steve’s daily life.

In Season 2 Buscemi returns to the benches of New York City with a new group of friends that include musician Elvis Costello, comedian John Oliver, actress Amber Tamblyn, comedian Robert Smigel, filmmaker Jim Jarmusch and magician David Blaine among many others.

“We are thrilled to share that Park Bench will be returning to AOL,” said Dermot McCormack President of Video and AOL Studios. “Steve Buscemi is one of the most recognizable actors of today and viewers love the unique and entertaining style he brings to Park Bench.”

All new episodes of Park Bench with Steve Buscemi will stream on parkbenchtheshow.com.

Buscemi and Olive are represented by WME, The Gotham Group and attorney George Sheanshang.


ABOUT AOL
AOL (NYSE:AOL) is a media technology company with a mission to simplify the Internet for consumers and creators by unleashing the world's best builders of culture and code. As the 4th largest online property in the U.S., with approximately 200 million monthly consumers of its premium brands, AOL is at the center of disruption of how content is being produced, distributed, consumed and monetized by connecting publishers with advertisers on its global, programmatic content and advertising platforms. AOL's opportunity lies in shaping the future of the digitally connected world for decades to come. Follow @AolOriginals on Twitter, Facebook, Instagram and Tumblr for more upcoming news about Park Bench with Steve Buscemi and other AOL Original Series.

About RadicalMedia
RADICALMEDIA is a global studio that creates some of the world’s most innovative content across all forms of media. The company has produced a number of award-winning projects, including the Academy Award® nominated documentary, PARADISE LOST 3: PURGATORY; the Emmy® winning film UNDER AFRICAN SKIES: PAUL SIMON'S GRACELAND JOURNEY; the Academy Award®-winning documentary THE FOG OF WAR; the Grammy Award®-winning CONCERT FOR GEORGE; and the Independent Spirit Award®-winning METALLICA: SOME KIND OF MONSTER; the pilot episode of the Emmy® and Golden Globe® winning series MAD MEN; six seasons of the series ICONOCLASTS for the Sundance Channel; the Emmy®-nominated series OPRAH'S MASTER CLASS and VISIONARIES for OWN; the Ron Howard-directed documentary, JAY-Z’S MADE IN AMERICA for Showtime; Joe Berlinger's WHITEY: THE UNITED STATES OF AMERICA V. JAMES J. BULGER for CNN Films; David Blaine: REAL OR MAGIC for ABC and the upcoming Nina Simone documentary, WHAT HAPPENED, MISS SIMONE? for Netflix directed by Liz Garbus.

About Olive Productions
OLIVE PRODUCTIONS is a New York based independent production company formed by Steve Buscemi, Stanley Tucci, and Wren Arthur. Recent productions include the Emmy-nominated web series, PARK BENCH WITH STEVE BUSCEMI, the HBO documentary, A GOOD JOB: STORIES OF THE FDNY, and the feature film, PAINT IT BLACK, directed by Amber Tamblyn.

Posted by Leroy Douresseaux at 6:32 AM