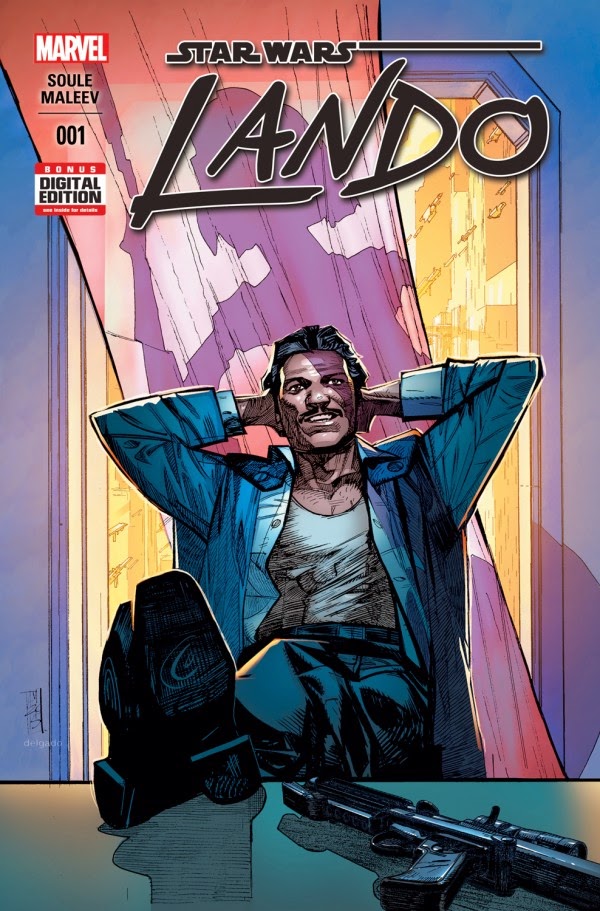 The following is a post from StarWars.com, presenting news announced at Star Wars Celebration 2015

Lando #1 Coming in July from Marvel

Hello, what have we here?

“Is Lando Calrissian the coolest character in all of Star Wars? Depends on who you ask, probably. But if you ask me, the answer is yes, and I plan to prove it with this story,” says series writer Soule.

In Marvel’s Lando, developed closely with Lucasfilm, the titular character — in the days before he became a hero, but still with Lobot at his side — looks to steal one of the galaxy’s most valuable ships. But, as usual, he may be in over his head.

“Before Cloud City, before his glorious Death Star run,” continues Soule, “Lando Calrissian was just a man trying to make his way through an uncaring universe determined not to recognize that he was undeniably the coolest man in the galaxy. But Lando’s got a plan to change all that… and it starts with the deal of a lifetime.”

Hot on the heels of the character’s return in the Star Wars Rebels animated series, Lando joins Marvel’s growing line of critically acclaimed and bestselling Star Wars comics, including Star Wars, Star Wars: Darth Vader, Star Wars: Princess Leia, and Kanan: The Last Padawan. This deal is getting better all the time.

Check out a special first look at two alternate covers for Lando #1 here, and stay tuned to StarWars.com and Marvel.com for more on Star Wars comics and graphic novels.

Posted by Leroy Douresseaux at 7:23 AM