Review: "The Grand Budapest Hotel" is Stylish and Quirky, of course 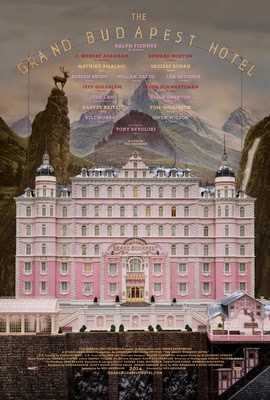 ADVENTURE/COMEDY/DRAMA with elements of fantasy

The Grand Budapest Hotel is a 2014 comedy-drama and adventure film from writer-director Wes Anderson.  Anderson and Hugo Guinness, who wrote the film's story with Anderson, were inspired by the writings of Austrian, Stefan Sweig (1881-19420, a novelist, playwright, journalist and biographer.  The Grand Budapest Hotel focuses on the adventures of a legendary concierge at a famous hotel and the lobby boy who becomes his trusted sidekick.

That takes the story back to the year 1932, during the hotel's glory days.  Monsieur Gustave H (Ralph Fiennes) is the Grand Budapest Hotel's devoted concierge.  He manages the hotel's large staff and sees to the needs of the hotel's wealthy clientele,  Gustave also often has sexual relationships with some of the hotel's elderly female clientele.  One of the aging women who flock to the hotel to enjoy M. Gustave's “exceptional service” is Madame Céline Villeneuve "Madame D" Desgoffe und Taxis a.k.a. “Madame D” (Tilda Swinton).

After Madame D dies, M. Gustave discovers that she has left him something in her will, a highly-sought after painting by Johannes van Hoytl (the younger), entitled, “Boy With Apple.”  M. Gustave also learns that Madame D was murdered and that he is not only the chief suspect, but that he is also caught up in a dispute over a vast family fortune.  M. Gustave is in trouble, but luckily he has hired a most capable and talented new lobby boy, Zero (Tony Revolori).  M Gustave's most trusted friend and protege, Zero, may be the only one who can help a legendary concierge save himself.

I said that Ethan and Joel Coen's 2010 film, True Grit (a remake of the classic John Wayne western), was a movie in which the brothers got to work out and to employ their visual tics, cinematic style, and storytelling techniques on a Western.  It was a good film, but it was truly “a Coen Bros. movie.”

In a similar fashion, The Grand Budapest Hotel is Wes Anderson employing everything that is eccentric, quirky, and unique to his films going back at least a decade.  Embodied in this movie, the Wes Anderson style is wonderful and invigorating and a joy to watch.  Truly, The Grand Budapest Hotel has a striking and an eye-catching visual style.  Anderson's mix of ornate visual environments and eccentric characters with deeply held emotions makes his movies hard to ignore, if you give them half the chance.

Those characters can be a problem, though.  For this film, Anderson easily offers 20 characters worth knowing, but other than M. Gustave and Zero, Anderson uses the others as quirky backdrops or as caricatures upon which he can hang his plot.  Thus, The Grand Budapest Hotel is beautiful, but depth of character is lacking.  The adventure of M. Gustave and Zero plays as if it were something straight out of a beloved children's book.  Much has been made of Ralph Fienne's performance in this film, and it is indeed a good one.  It must be noted that Tony Revolori as Zero is also quite good.  Still, the adventure of the two leads would be better with more interplay from the other characters than the film offers.  Adrien Brody's Dmitri Desgoffe und Taxis is wasted, and Willem Dafoe's J.G. Jopling is not so much a menacing villain as he is a bad guy straight out of Jay Ward Productions.

However, while this movie does not fail to burrow into the imagination, it does not really plant its roots in the viewers' hearts.  It is gorgeous on the surface, but Anderson seems to avoid the deeply emotional ideas he introduces, making The Grand Budapest Hotel an exceptional film, but keeping it from being truly great.  It is Wes Anderson art for Wes Anderson's art sake.


Posted by Leroy Douresseaux at 9:15 AM