Review: First Trip to "The Best Exotic Marigold Hotel" Was Quite Lovely 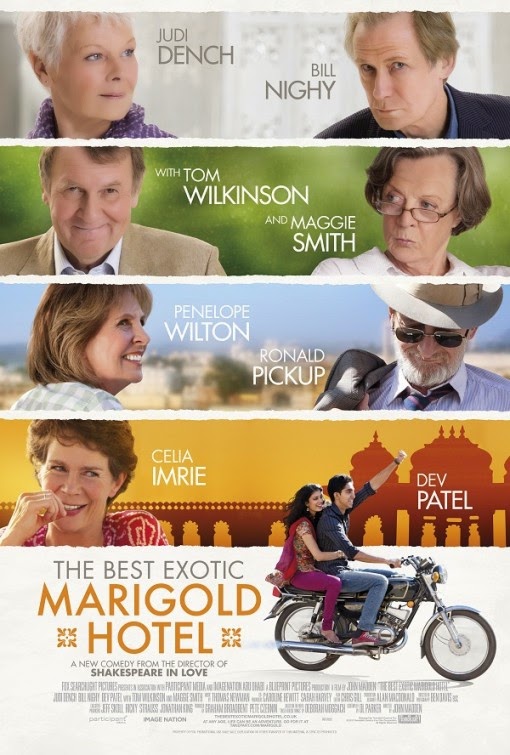 COMEDY/DRAMA with elements of romance

The Best Exotic Marigold Hotel opens in present day Great Britain and introduces a group of British retirees and AARP types.  Recently widowed housewife, Evelyn Greenslade (Judi Dench), is forced to sell the home she shared with her late husband in order to cover the huge debts he left.  Jean and Douglas Ainslie (Penelope Wilton and Bill Nighy) are searching for a retirement they can afford; they lost most of their savings through investing in their daughter's Internet business.

Muriel Donnelly (Maggie Smith) is a retired housekeeper who is need of a hip replacement operation.  Her doctor informs her that she can have it done far more quickly and inexpensively in India than she can in the U.K., but Muriel hates Indians (as well as every other person of color).  Madge Hardcastle (Celia Imrie) is searching for another husband.  Aging lothario Norman Cousins (Ronald Pickup) still wants to have sex with young women, but now, he needs to find a new place to try and re-capture his youth.  These six people decide to spend their retirement at a hotel in India, based only on the pictures on the hotel's website.

Meanwhile, high-court judge, Graham Dashwood (Tom Wilkinson), spent the first eighteen years of his life in India; he suddenly decides to retire and return there.  When these Brits arrive at The Best Exotic Marigold Hotel, they find it dilapidated.  The hotel's energetic young manager, Sunil Indrajit “Sonny” Kapoor (Dev Patel), promises that he will make the hotel look like what the website promises.  Now, everyone has to deal with the unexpected, and some are better at that than others.

The Best Exotic Marigold Hotel is simply frothy feel-good entertainment – nothing more, nothing less.  The characters are interesting, but not especially well-developed.  There are so many of them that screenwriter Ol Parker cannot really develop them in the amount of the film's running time that actually involves storytelling, which is less than its stated 100 minutes running time.

But, boy, did I enjoy this movie anyway.  The Best Exotic Marigold Hotel is sweet and charming, and its cast of veteran (some would say “senior citizen”) actors makes it a rare treat in a landscape of movies about children and 20-somethings saving the world.  Loving and wanting-to-be-loved are not exclusively the domain of lovelorn teens and the newly-turned middle-aged.  Yearning and striving for the good life:  well, old folks can want that, also.  That is why I am glad that this funny, heartwarming, and sometimes heartbreaking film is here to be enjoyed again and again.  The Best Exotic Marigold Hotel is a good place for movie lovers to visit or even to stay.


Posted by Leroy Douresseaux at 8:38 AM