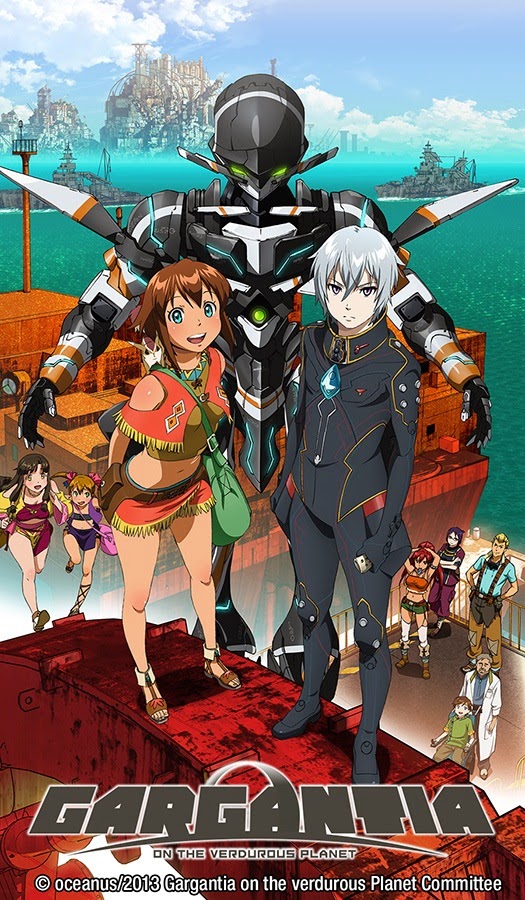 Fans also can enjoy the entire series run of the lushly animated sci-fi adventure, GARGANTIA ON THE VERDUOUS PLANET in both original Japanese and English dubbed versions, as well as the streaming premiere of two OVA episodes (episodes 14 and 15), beginning on April 5th. The fantasy-driven feature film action of INUYASHA THE MOVIE: FIRE ON THE MYSTIC ISLAND also joins the NEON ALLEY line-up in April along with not-to-be-missed NARUTO SHIPPUDEN simulcasts of the latest new episodes every Thursday throughout the month.  The new April 2015 update is further highlighted by additional new episodes from a variety of top-rated VIZ Media anime properties including:

GARGANTIA ON THE VERDUROUS PLANET
·         In the distant future, Ledo, a young soldier from space wakes up and finds himself marooned on an ocean planet. Growing up in space, and knowing nothing but battle, he is a stranger in a strange land, full of odd customs and a foreign language, but he’s not alone. Starting a new journey on this verdurous planet, Ledo must find a way to survive and reconcile the fact that he may never be able to return home!

INUYASHA THE MOVIE: FIRE ON THE MYSTIC ISLAND
·         The fourth film in the venerable INUYASHA saga is available for a limited time beginning April 11th in English-dubbed or subtitled editions!

·         Within the dark recesses of Horai Island, a group of half-demons live under the demonic rule of the Four War Gods. Escaping with barely a shred of hope, Ai, the youngest of the half-demons, returns to the island with Inuyasha, who must face not only the Four War Gods, but the past he left behind on the island fifty years ago.

·         Also don’t miss the premiere of a new English dubbed episode of NARUTO SHIPPUDEN every Saturday in April starting with Season 6, Episode 288 on April 4th.

THE PRINCE OF TENNIS
·         Newly added on and off-the-court action of the acclaimed sports drama continues with Episodes 27-39 now available to stream dubbed.

·         Fans can already watch all 50 PRINCE OF TENNIS episodes in their entirety available now with English subtitles.

·         In this sports anime drama adapted from the manga series created by Takeshi Konomi (published by VIZ Media), Ryoma Echizen is the 12-year-old son of a famous tennis player and a tennis genius is his own right. With talent in his blood and fire in his eyes, he backs up his confidence on the court with amazing skills. Now he has to overcome the older players on his high school team who are dead set against letting him surpass them. To defeat the slippery "Viper" Kaido, the calculating Sadahara Inui, and a host of other opponents, Ryoma will need everything he's gotten from his father and more!

RANMA ½
·         Fans can catch the classic RANMA ½ series from the very beginning! Episodes 1-23 are available now both dubbed and subtitled!

·         Also enjoy 2 new dubbed episodes of the classic, fan-favorite series premiering every Friday throughout the month picking up with Season 7, Episodes 153 and 154 on April 3rd.

Additional information on Neon Alley is available at: www.NeonAlley.com and http://blog.neonalley.com.

Posted by Leroy Douresseaux at 7:26 PM